Ahead of the Sochi games, Ban calls for observance of Olympic Truce

Secretary-General Ban Ki-moon today called for the observance of the Olympic Truce, calling on everyone engaged in armed hostilities to lay down their weapons and cease hostilities.

“The participants in the Sochi Games may carry the flags of many nations, but they come together under the shared banner of equality, fair play, mutual respect and non-discrimination,” Mr. Ban said in his message.

“I encourage all those involved in the games – Governments, groups, organizations and individuals – to uphold and defend these core Olympic ideals,” he added.

The ancient Greek tradition of the ekecheiria, or Olympic Truce, was born in the eighth century BC “to encourage a peaceful environment and ensure safe passage, access and participation for athletes and relevant persons at the Games, thereby mobilizing the youth of the world to the cause of peace.”

Making today’s appeal, Mr. Ban noted that his thoughts “are with the people of Syria, the Central African Republic, and South Sudan,” as well as the victims of the recent bombings in Volgograd, near Sochi.

The Secretary-General noted that the Truce is rooted in the hope that if people and Governments can put aside their differences for one day, they can build on that to establish more lasting cease-fires and “find paths towards durable peace, prosperity and human rights.”

Just three days ago, UN General Assembly President John Ashe issued his own solemn appeal for UN Member States to observe the historic tradition of ceasing hostilities ahead of the Games.

In November, the 193-Member Assembly underlined the importance of cooperating to “collectively implement the values of the Olympic truce around the world.”

The resolution has itself become a tradition at the UN, being passed every two years preceding the holding of the Winter and Summer Games respectively.

♦ Receive daily updates directly in your inbox - Subscribe here to a topic.
♦ Download the UN News app for your iOS or Android devices.
Olympic

With one year to go, Ban helps kick off countdown to Sochi Winter Olympics 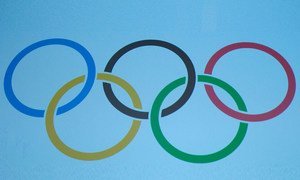 With a little over a week to go before the Winter Olympics open in Sochi, Russia, General Assembly President John Ashe today urged United Nations Member States to observe the historic tradition of ceasing hostilities ahead of the Games.