The congestion at United Nations bases in South Sudan has started to create risks for the 85,000 displaced civilians seeking shelter there, but they must not be forced or induced to leave, a United Nations independent human rights expert today warned.

“While decongestion of the sites is advisable, this cannot be a quick and standalone measure amid South Sudan’s ongoing crisis, but must be embedded in a long-term comprehensive strategy on internal displacement,” said the UN Special Rapporteur on the human rights of internally displaced persons, Chaloka Beyani.

Senior UN officials have stressed that the primary responsibility for protection of civilians rests with the Government of President Salva Kiir. There is hope that the cessation of hostilities agreement signed in Ethiopia last week will lead to an end to the fighting.

The UN Mission in South Sudan today said that an estimated 85,157 civilians are seeking protection in eight UNMISS bases throughout the country.

In Pibor, some 425 people, primarily women and children, fled to the base following rumours that anti-government forces were in the area.

“Targeted attacks against civilians, including women and children, are not acceptable,” the expert stated with concern over the ethnic politicization of the armed conflict.

The fighting has displaced an estimated 740,000 inside South Sudan since mid-December, according to the UN Office for the Coordination of Humanitarian Affairs (OCHA). More than 123,000 people have also fled to neighbouring countries, including Sudan, where the Sudanese Red Crescent Society is working with UN agencies and humanitarian partners to register new arrivals and provide aid, including food, water, shelter and health care.

Despite insecurity and limited access, UN agencies and humanitarian partners have provided assistance to nearly 300,000 people, including through measles and polio vaccinations for children in Jonglei and Juba.

In today’s statement, the Special Rapporteur also drew special attention to those displaced before the crisis: “There is urgent need to put in place a holistic system for protecting internally displaced persons in South Sudan,” he said, reiterating one of his key recommendations after his first official visit to the country in November 2013. 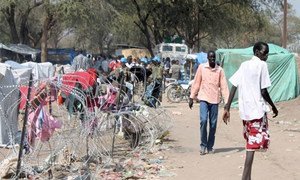 The United Nations peacekeeping mission in South Sudan is seeking to verify reports of human rights violations in the conflict that erupted just over a month ago, a spokesperson today said, as peacekeepers are boosting patrols in the world’s youngest nation.