The United Nations human rights office today welcomed the start of dialogue between President Viktor Yanukovych and the opposition in Ukraine following weeks of violent unrest, as well as the abolition this week of laws restricting the exercise of fundamental rights.

“We call for this dialogue to be sustainable, inclusive and grounded on the full respect of international human rights treaties ratified by Ukraine,” the spokesperson for the Office of the High Commissioner for Human Rights (OHCHR), Rupert Colville, told a news conference in Geneva.

The Ukrainian capital, Kiev, has been witnessing mass protests since late November, following a Government decision not to sign an agreement on broader integration with the European Union.

The demonstrations flared up again last week in the wake of legislation passed on 16 January that restricted the exercise of fundamental rights, including the rights to freedom of association, assembly and expression, and the operation of non-governmental organizations, as well as imposed penalties, including prison sentences, for breaches.

Mr. Colville welcomed the abolition by the Ukrainian Parliament earlier this week of those laws, and called on Mr. Yanukovych to sign the new law abolishing them.

“However, we are appalled by the deaths reported in recent days in Kiev, which should be promptly, thoroughly and independently investigated,” he stated. “We are also calling for an investigation into reports of kidnappings and torture.

“We reiterate our call to the Government and protesters to exercise restraint and create conditions for dialogue and reconciliation,” the spokesperson said.

He added that international human rights norms and Ukraine’s compliance with these standards and its obligations pertaining to human rights must be at the centre of any future solutions and reconciliation processes. 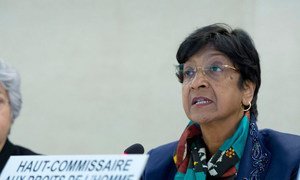