The United Nations peacekeeping mission in South Sudan is seeking to verify reports of human rights violations in the conflict that erupted just over a month ago, a spokesperson today said, as peacekeepers are boosting patrols in the world’s youngest nation.

The UN Mission in South Sudan (UNMISS) is working throughout the country to collect evidence and document abuses including in the capital Juba, and Bor, Jonglei State, where UN police and peacekeepers are sheltering more than 10,000 civilians.

Overall, 79,000 civilians are sheltering at eight bases throughout the country, according to a UN spokesperson.

Briefing journalists at UN Headquarters in New York, a spokesperson cited UNMISS confirming that it had conducted 264 military and 61 police patrols in various parts of the country in the last 24 hours.

In Leer, in Unity State, the Mission has received credible reports of ongoing fighting in the town, but it is not in a position to verify and confirm this independent1ly at this point, the spokesperson said.

Fighting between anti- and pro-Government troops has displaced more than 100,000 South Sudanese, the majority of whom have fled to neighbouring Uganda, Ethiopia, Kenya and Sudan.

Acting on the recommendation of UN Secretary-General Ban Ki-moon, the Security Council last month unanimously approved a temporary increase in the strength of the UNMISS of up to 12,500 military and 1,323 police from a current combined strength of some 7,000, through the transfer of units if necessary from other UN forces in the Democratic Republic of Congo (DRC), Darfur, Abyei, Côte d’Ivoire and Liberia. 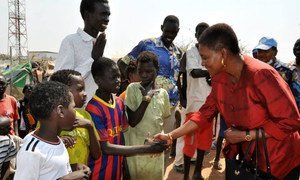 Noting that the recent conflict in South Sudan has rolled back development gains made over the past two years since independence, the top United Nations humanitarian official today voiced her hope that a recent ceasefire will enable people to return to their homes and rebuild their lives.