30 January 2014
The decision by India’s Supreme Court to commute 15 death sentences to life imprisonment is a ‘significant step’, independent United Nations human rights experts today said, urging the country to establish a moratorium on executions with a view of abolishing the death penalty.

“This judgment by the Supreme Court reaffirms the value of human rights and respect for human life, as enshrined in the Indian Constitution,” said the Special Rapporteur on extrajudicial, summary or arbitrary executions, Christof Heyns.

“If the death penalty is to be used at all, international law clearly requires that it must follow a trial that meets the highest standards of fairness and due process guarantees,” he added.

On 21 January, the Indian Supreme Court commuted the death sentences of 13 individuals after finding that there had been an “unexplained and unreasonable delay” by the authorities in deciding on their petitions for mercy.

Two other individuals had their death sentences commuted to life on the ground of mental illness. “I am pleased to see that the Supreme Court referred to international standards and confirmed that persons suffering from mental illness could not be executed,” said Mr. Heyns.

The Supreme Court also ruled that all death row prisoners should have regular mental health checks and appropriate medical care be given to those in need.

Other general guidelines by the Supreme Court on the treatment of persons on death row include: solitary confinement during the period awaiting a decision on the mercy petition is unconstitutional; persons sentenced to death are entitled to legal aid, including for filing mercy petitions; a notice of at least 14 days must be given prior to execution; a final meeting between the prisoner and their family and friends should be facilitated.

Also welcoming the Supreme Court’s decision, the Special Rapporteur on torture and other cruel, inhuman or degrading treatment or punishment, Juan E Méndez, stressed that Indian courts must continue to ensure that capital punishment does not violate the absolute prohibition on torture or ill-treatment.

Under all circumstances the absolute prohibition of torture and cruel, inhuman or degrading treatment or punishment and the strict adherence to safeguards against them constitute fundamental limits on the use and enforcement of the death penalty, he said.

The statement by Mr. Heyns and Mr. Méndez was also endorsed by the Chair-Rapporteur of the Working Group on Arbitrary Detention, Mads Andenas. 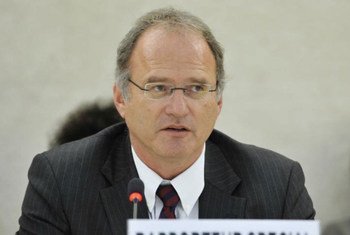 30 March 2012
While commending India's generally high level of commitment to human rights, a United Nations expert today urged the Government to continue to fight impunity for extrajudicial executions, and communal and traditional killings.