UN Photo/Paulo Filgueiras
Special Representative of the Secretary-General and Head of the UN Office in Burundi (BNUB) Parfait Onanga-Anyanga briefs the Security Council.

28 January 2014
Despite Burundi's request that the United Nations mission helping it recover from decades of ethnic war end by mid-2014, Secretary-General Ban Ki-moon is recommending its renewal for another full year as the country moves towards crucial elections amid political violence and intra-party tensions.

“Our best efforts to consolidate peace in Burundi, as advanced as they are, remain incomplete,”

Secretary-General Ban Ki-moon's Special Representative Parfait Onanga-Anyanga told the Security Council today in presenting the latest report on the small Central African country, where hundreds of thousands of people have perished in largely inter-ethnic fighting between Hutus and Tutsis that erupted even before it gained independence from Belgium in 1962.

Noting the fragility of essential peacebuilding indicators, he told the Council that political actors meeting from 27 to 29 November to assess the road map adopted last March had recognized the need to tackle such challenges as the “climate of distrust” among key political stakeholders, the absence of an agreed process to review the constitution and persistent violence among young people affiliated with certain parties. For such reasons, the Secretary-General had called for sustained political support.

Burundi is often cited as a success story in UN efforts to consolidate peace in countries that have been ravaged by conflict and was the first country, along with Sierra Leone, to be put on the agenda of the UN Peacebuilding Commission (PBC) when it was set up in 2006, to prevent post-conflict nations from relapsing into bloodshed.

In his report recommending a full year's extension of the UN Office in Burundi (BNUB), Mr. Ban noted Burundi's “substantial progress, overcoming formidable challenges since the end of the civil war,” but warned that such gains are far from irreversible as the country prepares for presidential elections in 2015 - “a litmus test” for long-term stability.

“Now, more than ever, the Government of Burundi must demonstrate visionary leadership by continuing to promote the spirit of dialogue and consensus enshrined in the [2000] Arusha [peace] accords, which has helped Burundians to address the structural causes of conflict in their country,” he said. “Given Burundi's history and social make-up, majority rule and a winner-takes-all mentality could erase such hard-won gains.”

He noted that a UN strategic assessment conducted from September to December found that the political scene remains deeply polarized, with the Government using its dominance in Parliament to enact laws infringing on political and civil rights, contributing to a shrinking of political space, while the opposition threatens to take steps to confront the Government.

Mr. Ban stressed that President Pierre Nkurunziza's request that BNUB, headed by Mr. Onanga-Anyanga, be drawn down within six months as of 15 February, so that Burundi can take fuller ownership of its political process, “poses a difficult dilemma, given the continuing need for a United Nations political presence whose functions cannot be entirely covered by the United Nations country team.”

The Government has suggested the country team, a collection of UN agencies concerned principally with development and humanitarian issues, take over BNUB's role, which is political. If the Government persists in its position that a 12-month extension is not acceptable, Mr. Ban suggested the Council consider two other options.

A new peacebuilding mission with a more focused mandate could replace BNUB as an interim step to preparing the ground for a transition of functions to the UN country team, or “as a last resort” a special envoy could be appointed to facilitate dialogue and broad-based participation in political life and coordinate efforts to ensure an environment conducive to a free and fair poll.

BNUB was set up in 2006 following a ceasefire between the Government and the last remaining rebel force to support peace consolidation, democratic governance, disarmament and reform of the security sector. It replaced the UN Operation in Burundi (ONUB), a peacekeeping mission which at its peak had nearly 6,000 military personnel.

Noted increasing tensions and intra-party disputes, Mr. Ban urged all political actors to refrain from using incendiary language and voiced concern at acts of violence committed by youth affiliated with political parties and the apparent impunity they seem to enjoy.

“Acts of political violence, including those committed by these youths, must be prosecuted,” he stressed. “I urge the Government and political parties to take all necessary measures to ensure that youth are not exposed to political manipulation that could lead to acts of violence and intimidation.”

He also voiced concern at continued impunity for human rights violations, including sexual violence and rape, urging the authorities “to apply a strict zero-tolerance policy regarding human rights abuses committed by the security forces.”

Mr. Ban urged the Peacebuilding Commission to continue its efforts to sustain international support and mobilize resources for Burundi and called on development partners to fill the funding gap for the implementation of Burundi's second poverty reduction strategy.

“The international community has made a significant investment in Burundi,” he noted. “It must continue to play a constructive role through enhanced coordination, particularly for the preparations for the elections and support for security sector reform. More broadly, the significant progress Burundi has made in furthering peace and stability must be reinforced by socioeconomic development.” 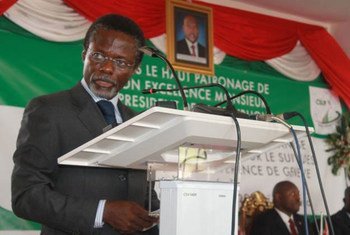 4 December 2013
The United Nations today called on all political parties and actors in Burundi to show restraint as the country carries out its constitutional review process.