United Nations trucks in Syria are on standby to deliver urgently needed food and medicines to 500 besieged families who have been trapped in the Old City of Homs without any aid for almost two years, once the warring parties allow access, the UN World Food Programme (WFP) announced today.

Nearly 1.6 million civilians in other parts of Syria have been without regular WFP supplies for months.

Access for humanitarian aid to trapped civilians is one of the major issues being discussed at ongoing talks between the Syrian Government and the main opposition group in Geneva which seek to end nearly three years of civil war in which well over 100,000 people have been killed and nearly 9 million others driven from their homes since the conflict erupted between the Government and various groups seeking the ouster of President Bashar al-Assad.

Speaking to reporters after the latest round of talks, UN-Arab League Special Representative, Lakhdar Brahimi, who is mediating the discussions, told reporters there has been no movement today on getting aid to Homs. “We have not had any breakthrough, but we are still at it and this is good enough as far as I am concerned,” he said before announcing that he has cancelled the afternoon meeting between the two sides.

“I will repeat again that these are not easy negotiations and they haven’t been easy today, they haven’t been…these past days and they will probably not be easy in the coming few days,” he said, noting that representatives of the two sides told reporters that they intend to continue the talks until Friday, as originally planned. “So nobody is walking out. Nobody is running away,” said Mr. Brahimi.

As for the situation n Homs, once all parties on the ground allow a UN interagency convoy to proceed, WFP will deliver 500 family rations and 500 bags of wheat flour to those under siege in the Old City, enough for 2,500 people for one month, WFP spokesperson Elisabeth Byrs told a news briefing in Geneva.

The agency also plans to send 100 boxes of Plumpy’doz, a specialized nutrition product which helps to treat stunting and acute malnutrition in children, and is prepared to provide ready-to-eat food rations to women and children who choose to be evacuated from the Old City of Homs, if this is granted.

WFP and its partners have had irregular access to other towns in the Homs region, including Al Rastan, Al Houlah, Talbisah, Ter Ma’ala and Ghanto, meaning that food deliveries have only been possible every three to six months through interagency convoys, when conditions allow.

The agency is increasingly concerned for people living in hard-to-reach areas across Syria with no access to food assistance, Ms. Byrs stressed. Over 775,000 people in Al-Raqqa, Al-Hassakeh and Deir Ezzor have not received WFP aid for consecutive months, while over 40 locations in Rural Damascus remain under siege, affecting an estimated 800,000 people.

WFP has repeatedly called for sustained access to all parts of Syria where regular access to communities is limited. “It is not just one convoy into the Old City of Homs but access to all communities needing help that is required,” Ms. Byrs said.

The UN Children’s Fund (UNICEF) has provided a list of supplies to the Government for approval on the interagency convoy, including emergency medical kit and a cholera kit, soap and hygiene materials, water treatment supplies and oral rehydration salts, winter clothing for infants and polio vaccines, spokesperson Marixie Mercado told the briefing.

All of those supplies are available at the UNICEF Homs warehouse, about 10 kilometres from the Old City, and can go in as soon as they have a green light.

Meanwhile the UN Relief and Works Agency for Palestine Refugees in the Near East (UNRWA) reported that it has been unable to deliver aid to 18,000 residents of the Yarmouk camp near Damascus for the past 10 days. 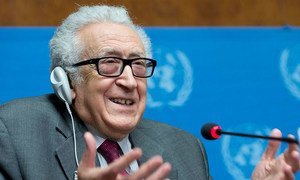 Discussions on humanitarian issues at the Syria talks in Geneva “have not produced much,” said the Joint Special Representative of the United Nations and the League of Arab States today, but he added “there is still hope,” and the talks will resume tomorrow.