UN Photo/Violaine Martin
Journalists wait for the arrival of official delegations at the Geneva II Conference on Syria, in Montreux, Switzerland.
28 January 2014

The head of the United Nations agency tasked with defending press freedom today condemned the separate killings of four television journalists in Pakistan and Iraq, calling for those responsible to be brought to trial.

“Violence against the media cannot be allowed to continue with impunity,” said the Director-General of the UN Educational, Scientific and Cultural Organization (UNESCO), Irina Bokova.

In the Pakistani city of Karachi, technician Waqas Aziz, security guard Ashraf Yusuf, and driver Khalid Khan – all three employed by 'Express News' – were fatally shot on 17 January while in their television van. An extremist group has claimed responsibility for the attack.

“It is vital that the authorities take immediate action to improve the safety of journalists and media workers, as an essential part of protecting freedom of expression and media freedoms in the country,” Ms. Bokova said.

The names will be added to UNESCO's dedicated webpage for journalists killed in the line of duty.

UN official condemns killing of journalists in Afghanistan and Brazil 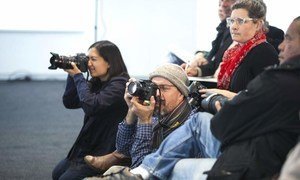 The head of the United Nations agency tasked with defending press freedom today denounced the murder of television journalist Zakir Ali in Pakistan’s Sindh province and urged the authorities to ensure that those responsible are brought to justice.