Syria: Civilians to be allowed out of Homs, UN-Arab League envoy says

The Syrian Government has agreed to allow women and children in the besieged Syrian city of Homs to leave “immediately”, the Joint Special Representative of the United Nations and the League of Arab States today said after a second day of face-to-face talks in Geneva.

“We are going to inform our people in Damascus, or we have already informed them about this, so hopefully, starting tomorrow, women and children will be able to leave the old city of Homs,” Lakhdar Brahimi told journalist at the Palais des Nations.

“I hope that the rest of civilians will be able to leave soon after that,” he added, noting that the Government has asked for a list of the men's names first.

The UN, along with the International Red Cross and civil society organizations, has also been discussing humanitarian access to Homs, with an aid convoy on standby.

“There is an agreement now from the armed groups inside that they will not attack a humanitarian convoy if it enters Homs,” Mr. Brahimi said.

The city Governor was supposed to meet with his advisors and Damascus today to agree on access to the town which has been surrounded since last year by pro-Government forces.

“We hope that something will happen tomorrow, Monday,” Mr. Brahimi said.

He noted that despite a political agenda, the two parties felt “that you cannot start negotiations about Syria without having some discussions about the very, very bad humanitarian situation”.

Well over 100,000 people have been killed and nearly 9 million others driven from their homes since the conflict erupted in March 2011 between the Government and various groups seeking the ouster of President Bashar al-Assad.

More than 9.3 million people within the country need humanitarian aid, the UN has said, with over 2.5 million of them living in areas where access is seriously constrained or non-existent.

The joint envoy met with both sides together this morning, then held separate discussions with each in the afternoon – a format that is expected to be duplicated tomorrow.

In addition to humanitarian concerns, today's agenda also included detainees, prisoners and people who have been kidnapped.

“The Government has asked the opposition to give them the list of the people that are in detention in the hands of the various armed groups,” he said. “And the opposition agreed that they will try and collect the lists that have been asked from those organizations they have authority over or contacts with.”

He noted that “there are unfortunately very many parties, and there are no contacts with some of them, and therefore we will not know who are the people being held by them and who died”.

The talks are expected to continue tomorrow with the two parties making “some general statements on the way forward”.

Mr. Brahimi said he is happy that, in a general way, there is mutual respect in the talks.

“God willing this mood that I mentioned will continue and that we will make progress gradually,” he said. 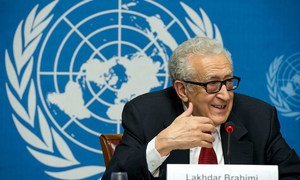 Representatives of the Syrian Government and opposition groups today discussed humanitarian issues and tomorrow will focus on release of prisoners and kidnapped victims, the Joint Special Representative of the United Nations and the League of Arab States today said following the opposing sides' first ever meeting at a negotiating table.