Representatives of the Syrian Government and opposition groups have agreed to meet tomorrow for the first time ever in the same room, the Joint Special Representative of the United Nations and the League of Arab States said in Switzerland after another day of bilateral talks with both sides, which he described as “encouraging.”

“Both parties are going to be here tomorrow and they will be meeting,” Lakhdar Brahimi told journalists after meeting with the delegations from the Syrian Government and then with the Syrian opposition, at the Palais des Nations in Geneva.

The envoy said the first session of talks will be “to make sure that we understand what we are doing”, and focus on “practical issues that hopefully will make discussions later easier.”

Mr. Brahimi said he hoped for a “good beginning” to talks that “will continue until the end of next week.”

“It's very clear to both sides that the 'meat' of the conference is how to implement these positions in the Geneva communiqué,” Mr. Brahimi said.

Humanitarian access, part of the communiqué, is among the top priorities on the agenda. UN Under-Secretary-General for Humanitarian Affairs Valerie Amos, who was among the officials taking part in the high-level session of the talks held on Wednesday in Montreux, stressed the urgency of making arrangements for aid to flow into a country where, well over 100,000 people have been killed and nearly 9 million others driven from their homes in nearly three years.

“A lot of discussions are taking place all the time. Valerie Amos is not doing anything else except that. Things have improved a little bit, never enough,” said Mr. Brahimi today.

He told journalists that the process was expected to be “difficult and complicated.” He added that “in our business, certainty is a very rare commodity” but that everyone has gone into it with “eyes wide open.”

“I think the two parties understand what is at stake,” he said. “I hope that all the three parties – the Government, the opposition and the United Nations will be up to the task,” he said, stressing that the goal for all involved is to “save Syria.”

“I hope also that the people who support one side or another also understand what is at stake and will do their share in supporting this process. So wish us luck,” he told the journalists. 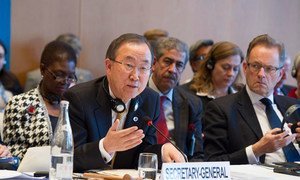 Secretary-General Ban Ki-moon today opened a concerted new effort to end the brutal civil war in Syria, urging the Government, the opposition, and representatives of some 40 other countries and regional organizations to seize the historic opportunity to end the bloodshed.