As United Nations officials welcome the signing of an agreement to end the fighting in South Sudan, humanitarian agencies are continuing their efforts to assist scores of civilians in need as a result of more than a month of violence.

The ceasefire, signed yesterday in the Ethiopian capital, Addis Ababa, by representatives of President Salva Kiir and former deputy president Riek Machar, seeks to end the conflict that began in mid-December and drove nearly 500,000 people from their homes and left twice as many in dire need of aid.

Echoing comments by Secretary-General Ban Ki-moon yesterday, his Special Representative and head of the UN Mission in South Sudan (UNMISS), Hilde F. Johnson, called on all the parties to fully and immediately implement the agreement.

In a news release issued by the Mission, Ms. Johnson also called on the parties to start an inclusive and comprehensive political dialogue to resolve the underlying causes of the conflict, work towards national reconciliation and build effective State institutions “so the people of South Sudan enjoy the peace they so much deserved.”

As hopes rise for an end to the fighting following the signing of the agreement, the UN World Food Programme (WFP) said it is poised to seize any window of opportunity to deliver food assistance to areas that have been difficult to reach.

“We hope that the signing of an agreement in Addis will bring fighting to a stop and allow WFP and other humanitarian agencies to provide urgently needed relief to the people affected by this conflict,” said WFP Country Director Chris Nikoi. “But it is important to note that humanitarian needs will continue, long after the fighting stops.”

So far, WFP has assisted some 178,000 people displaced as a result of the crisis, distributing food in many locations, including Juba, Bentiu, Bor, Malakal, Leer, Mingkaman, Yirol East, Yirol West, Mabior, and Aweng.

WFP said it remains concerned that the conflict has done so much damage that many people will continue to need food assistance for months – or longer – as they attempt to rebuild their lives. Many homes, food markets and small businesses have been destroyed, and many people have lost their annual harvests, leaving them with nothing at a time of year when they struggle to feed their families, the agency said.

WFP has launched a $57.8 million emergency operation to respond to urgent food needs of displaced and conflicted-affected people in South Sudan. Donor contributions are urgently required for this operation and to provide food for the tens of thousands of people who have fled across South Sudan’s borders into the neighbouring countries.

In Uganda, the UN High Commissioner for Refugees (UNHCR) is kicking off a mass immunization campaign today to prevent the spread of measles among South Sudanese refugees. Five cases have been registered so far and three suspected cases have been reported among the more than 59,000 refugees who have arrived since the conflict began.

The immunization campaign, carried out in cooperation with the UN Children’s Fund (UNICEF) and other partners, will cover all refugee and Ugandan children below 15 years in age in the northern districts of Arua and Adjumani districts.

“UNHCR welcomes the signing of the South Sudan ceasefire agreement and hopes it will be implemented to avert further displacement within and outside of the country,” the agency’s spokesperson in Geneva, Adrian Edwards, told reporters.

According to UNHCR, more than 100,000 South Sudanese have fled to neighbouring Uganda, Ethiopia, Kenya and Sudan since mid-December. Inside South Sudan, some 490,000 people are at present internally displaced, including 75,000 civilians seeking refuge and protection on UN bases. In addition, South Sudan is host to 230,000 refugees, most of whom are from Sudan. 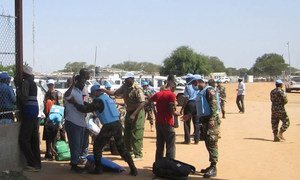 Secretary-General Ban Ki-moon and the United Nations Security Council today welcomed the signing of an agreement between anti- and pro-Government forces in South Sudan, a step towards a comprehensive deal that would halt the violence that has engulfed the country for more than a month.