23 January 2014
Secretary-General Ban Ki-moon and the United Nations Security Council today welcomed the signing of an agreement between anti- and pro-Government forces in South Sudan, a step towards a comprehensive deal that would halt the violence that has engulfed the country for more than a month.

Representatives of President Salva Kiir and former deputy president Riek Machar signed the agreement on cessation of hostilities, following three-weeks of talks mediated by the Intergovernmental Authority on Development (IGAD) in the Ethiopian capital of Addis Ababa.

Mr. Ban “calls on the parties to immediately implement this agreement,” his spokesperson said in a statement, which also congratulates IGAD on its “successful mediation.”

The UN chief also underscored the need to continue without delay a national political dialogue to reach a comprehensive peace agreement, with the participation of all South Sudanese political and civil society representatives, including the Sudan People’s Liberation Movement/Army (SPLM/A) detainees.

The ceasefire seeks to ease a political dispute in the world’s youngest nation between President Kiir and his former deputy, Mr. Machar, who was removed from office in July of 2013 and later accused of attempting a coup. The tensions escalated on 15 December into a full-scale conflict between forces loyal to either side, driving 400,000 people from their homes and leaving twice as many in dire need of aid.

The 15 members of the Security Council voiced their support for the agreement, welcoming the signing as a move towards comprehensive reconciliation which deals with root causes of the conflict. The Council also condemned violent attacks against civilians.

“The Council Members, all of them, expressed support for UNMISS [UN Mission in South Sudan] and reiterated importance that all parties cooperate fully with UNMISS,” said Mahmoud Daifallah Mahmoud Hmoud, Senior Deputy Permanent Representative of Jordan, which holds this month’s rotating presidency of the Council.

He spoke following a closed-door briefing, via video link from Juba, by Hilde Johnson, the head of UNMISS, and Ivan Simonovic, UN Assistant Secretary-General for Human Rights, who just returned from an official visit to the country.

In addition, he said the Council condemned “attacks and accusations mounted against UNMISS and called for all parties to stop such acts and cooperate with [the Mission] in the fulfilment of its mandate.”

Echoing the need for cooperation, Mr. Ban reiterated his call for all parties to ensure freedom of movement for UNMISS, humanitarian workers and human rights monitors, and welcomed the Government of South Sudan’s reassurances of its full support to the Mission and commitment to honour its Status of Forces Agreement (SOFA).

“The United Nations stands with the people of South Sudan and will continue to do everything within its means to protect civilians at risk and provide the necessary humanitarian assistance,” Mr. Ban said.

Meanwhile, the UN Mission in the country today confirmed that its peacekeepers completed weapons searches in their eight main bases, where some 76,000 civilians continue to seek refuge.

“The Mission is also seeking to work with national authorities to ensure that areas immediately surrounding its bases are free of weapons,” UN spokesperson Farhan Haq told journalists in New York, quoting the UN Mission in South Sudan (UNMISS).

The weapons searches come just days after UN Secretary-General Ban Ki-moon voiced alarm at the attempt on Sunday by senior members of South Sudan’s Government and military to forcibly enter into the UNMISS compound in Bor, Jonglei state.

In the past 24 hours, the Mission carried out 186 military patrols and 62 police patrols in the capital Juba, and in Jonglei, Unity and Upper Nile states.

There are reports of fighting continuing to occur “in multiple locations in the country”, the spokesperson said.

In Bor, the Mission reported hearing gunfire yesterday evening from the north of its compound.

The base there is making improvements to strengthen its perimeter walls at its protection site where some 10,000 civilians have been sheltering since fighting broke out about a month ago.

According to the UN Office for the Coordination of Humanitarian Affairs (OCHA), around 468,000 people are estimated to have been displaced within South Sudan since 15 December. An additional 83,900 have crossed into neighbouring countries, over half to Uganda, according to UN figures.

In Malakal, in the north-eastern part of the country, UNMISS reports that its human rights division continues efforts to verify the accuracy of reported serious human rights violations, to collect evidence and document rights abuses and the violations of international humanitarian law that might have taken place.

Reports and allegations relate to violations by both the so-called ‘White Army’ when it controlled the town, and by the Sudan People’s Liberation Army (SPLA) after it regained the control of the town after 20 January.

The Mission stresses that verification by its human rights team, at this stage, has been extremely difficult because of fighting and subsequent lack of access.

UN Assistant Secretary-General for Human Rights, Ivan Šimonovic, is due to brief the Security Council today on his recent visit to eth country. Hilde Johnson, the head of UNMISS, is expected to weigh in via video conference from Juba. 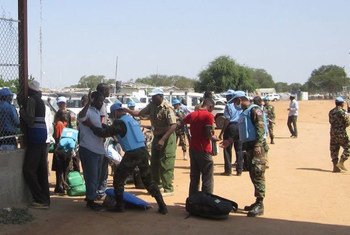 23 January 2014
Secretary-General Ban Ki-moon and the United Nations Security Council today welcomed the signing of an agreement between anti- and pro-Government forces in South Sudan, a step towards a comprehensive deal that would halt the violence that has engulfed the country for more than a month.