The security situation in Darfur deteriorated over the course of 2013 and remains volatile, a senior United Nations official told the Security Council today, while calling on all sides to join negotiations aimed at achieving a permanent ceasefire and comprehensive peace for the people of the strife-torn region of Sudan.

Recent months have also been marked by a significant worsening of the humanitarian situation, continued attacks on UN and relief personnel and limited progress in the implementation by the signatories of the Doha Document for Peace in Darfur (DDPD), Under-Secretary-General for Peacekeeping Operations Hervé Ladsous said in his briefing.

He said that while the signatories achieved some limited progress with the Doha Document – which forms the basis for a permanent ceasefire and comprehensive peace agreement to end the fighting that began in 2003 – these successes did not yield direct and significant benefits to the general population of Darfur.

“The parties must accelerate the implementation of outstanding provisions of the agreement, with an increased focus on tangible benefits to local communities, including the close to two million displaced,” he stated.

So far, the Sudanese Government and two major rebel groups have committed to the Document – the Liberation and Justice Movement (LJM) and the Justice and Equality Movement (JEM).

The Joint Special Representative of the African Union and the UN for Darfur, Mohamed Ibn Chambas, told the press in the Sudanese capital, Khartoum, today that he will scale up efforts to pave the way for serious talks between the Government and those groups that have not yet signed on to the Document.

“The Mediation will explore every means possible – national, regional and international partners – to influence all sides to join the negotiation table to achieve the true comprehensive peace that the people of Darfur deserve,” said Mr. Chambas, who is also Joint Chief Mediator as well as head of the UN-AU peacekeeping mission in Darfur (UNAMID).

“While overall peace and security is critical, the actual needs of the people on the ground can only be addressed by instituting a strong development agenda that improves the socio-economic conditions in Darfur and encourages the return of the vast internally displaced and refugee populations languishing for over a decade in camps scattered across Darfur and neighbouring countries,” he added.

The total number of internally displaced people has increased to almost two million, with an estimated 400,000 people having been forced to flee new outbreaks of conflict last year, Mr. Ladsous noted in his briefing.

“Protracted displacement, food insecurity and a lack of basic services drive chronic vulnerability in the region,” he stated, adding that malnutrition rates are above emergency thresholds in all five of Darfur’s states and less than 10 per cent of the population has access to both clean water and improved sanitation.

Mr. Ladsous added that humanitarian needs are expected to remain high this year in Darfur, where an estimated 300,000 people have died since fighting between rebel groups and Government forces and their allies, militiamen known as the Janjaweed, began in 2003.

A total of 3.5 million people, approximately 30 per cent of Darfur’s population, currently receive humanitarian assistance from the international community.

Highlighting the significant threats to UN and humanitarian personnel in the region, Mr. Ladsous reported that 16 peacekeepers were killed as a result of hostile acts in Darfur throughout 2013 – a 50 per cent increase compared to the previous year. This brings to 57 the number of personnel killed since UNAMID was deployed in 2008.

“The Government of Sudan must investigate and expeditiously bring to justice the perpetrators,” he stressed. 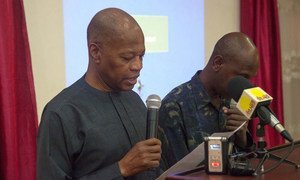 In an effort to bring all groups in Sudan’s conflict-wracked Darfur region into the peace process, the joint African Union-United Nations mediator has held talks with Chadian President Idriss Déby, seeking his support.