21 January 2014
The Security Council once again today acknowledged the role of the United Nations regional office in assisting countries in Central Asia to respond to threats and challenges, including terrorism and religious extremism, and reaffirmed the importance of the use of preventive diplomacy and early warning mechanisms to assist in the peaceful settlement of disputes.

In a statement to the press, the Council acknowledged the role of the United Nations Regional Centre for Preventive Diplomacy for Central Asia (UNRCCA) in assisting those countries, in accordance with its mandate and through regional cooperation, to respond to domestic and transnational threats to peace and in supporting the sustainable development of the region.

The UNRCCA was established in 2007 in Ashgabat, the capital of Turkmenistan. It assists and supports the Governments of Kazakhstan, Kyrgyzstan, Tajikistan, Turkmenistan and Uzbekistan in finding solutions for emerging problems and eliminating potential threats.

Welcoming today's briefing by Miroslav Jenča, Special Representative of the Secretary-General and head UNRCCA on the Centre's work over the past six months, the Council stressed the need for further cooperation and coordination between the region's States, UNRCCA and regional organizations to strengthen Central Asia's capacity to overcome challenges to peace, stability and sustainable development through the mechanisms of preventive diplomacy and dialogue.

In their statement, the Council members welcomed UNRCCA's specific focus on supporting the cooperation among the Central Asian States in the area of counter-terrorism and religious extremism, and encouraged the realization of the Joint Plan of Action agreed upon for implementing the United Nations Global Counter-Terrorism Strategy in the region.

They also welcomed the launch of the second phase of the joint UNRCCA and CTITF (Counter-terrorism Implementation Task Force) project aimed at implementing the Joint Plan of Action under the Strategy that includes a number of regional activities designed to enhance capacity-building and information sharing.

Recognizing the threat posed by illicit drug production, trade and trafficking to international peace and stability in the region, the Council emphasized the importance of close coordination between Afghanistan and its neighbours, in particular the Central Asian States, in combating drug trafficking. They Council commended the Centre's efforts, in collaboration with the UN Office on Drugs and Crime (UNODC) and relevant regional organizations, to help those States address this problem. 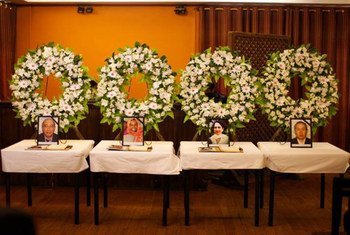 20 January 2014
United Nations today flew its flags at half-mast in honour of four staff members killed in Friday’s terrorist attack in Kabul, with Secretary-General Ban Ki-moon and other senior officials pledging to continue working in active support of Afghans.