UN Photo/Paulo Filgueiras
A wide view inside the Security Council as it meets on the situation in the Middle East.
20 January 2014

Secretary-General Ban Ki-moon today called on Iraq’s political leaders to enter inclusive talks in the face of rising conflict and warned that failure to make progress in Israeli-Palestinian peace talks could spark a new outbreak of violence.

“Today, I reiterate my message to Iraqi political leaders to fulfil their responsibilities to ensure inclusive dialogue, social cohesion, and concrete political progress,” he told the United Nations Security Council at the start of the body’s regular debate on the situation in the Middle East following his return from a visit to the region.

“The country is again facing serious threats to its stability,” he said. Mr. Ban, who visited Iraq ahead of a stop in Kuwait were he chaired a humanitarian donors’ conference for Syria, which generated some $2.4 billion in pledges, said he discussed his concerns with many Iraqi leaders and urged all sides to remain committed to political dialogue and uphold respect for the rule of law and human rights.

“I was reassured by their pledge to hold parliamentary elections as scheduled on 30 April,” he added. “Today, I reiterate my message to Iraqi political leaders to fulfil their responsibilities to ensure inclusive dialogue, social cohesion, and concrete political progress.”

Earlier this month the Security Council strongly deplored ongoing clashes in the cities of Ramadi and Fallujah in Anbar province in western Iraq, condemning attacks carried out by Al-Qaida-linked militants and stressing the critical importance of continued national dialogue and unity.

Turning to the Israeli-Palestinian conflict, Mr. Ban said 2014 will be a decisive year to “draw back from a perilous and unsustainable status quo,” and he praised United States Secretary of State John Kerry’s “diligent” work to lay out a framework on all core issues to address both sides’ aspirations in a fair and balanced manner on the path to a final status agreement.

“The failure of political progress could fuel a downward spiral on the ground,” he warned. “I am alarmed by recurrent violence and incitement from all sides, as well as continued [Israeli] settlement activity which is illegal under international law. Building settlements is not consistent with building a long-lasting peace agreement.”

He stressed that any framework agreement must be consistent with the principles on all core issues outlined in the internationally endorsed Road Map plan, which provides for two States – Israel and Palestine – living side by side in peace within secure borders.

“Palestinians must be able to realize their legitimate aspirations to statehood, self-determination, dignity, and freedom, including an end to the occupation that began in 1967 with a just solution to the plight of refugees, and a resolution of the status of Jerusalem,” he said. “Israelis must be able to live in peace and security, within a recognized border, paving the way for their increasing integration in a stable and secure region.”

Mr. Ban said he does not underestimate the difficulties, “but the risks of inaction or surrender are far greater. We face possibly the last attempt to salvage the two-State solution. Quite simply, this is too important to fail. My message to [Palestinian] President [Mahmoud] Abbas and [Israeli] Prime Minister [Benjamin] Netanyahu is clear,” he stressed.

“If you are prepared to take the bold decisions required, I will push ahead on the positive agenda of peace dividends for both sides and ensure the United Nations works towards realizing the legitimate aspirations of the Israeli and Palestinian peoples within the framework of a comprehensive regional settlement.

“We must make the most of the prospect that Secretary Kerry has unlocked to see the creation of two States living side-by-side in peace and security that their peoples so desperately desire and deserve.”

Mr. Ban also called on Member States to provide additional funding for the UN Relief and Works Agency for Palestine Refugees (UNRWA), which is facing an expected end-of-year shortfall of $67 million, and reiterated the need for generous support for relief efforts for the refugees who have fled the Syrian civil war to Lebanon and now total more than 860,000, a six-fold increase over last year. 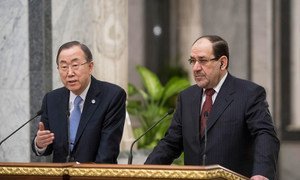