UNICEF/UKLA2012-00867/KARIN SKERMBRUCKER
An entire generation is in grave danger. The #childrenofsyria are watching their futures slip away. They desperately want and need to go to school. To be protected. To be comforted.
19 January 2014

Secretary-General Ban Ki-moon has welcomed the decision taken on Saturday by the opposition National Coalition of Syrian Revolution and Armed Forces to participate in this week’s international conference that aims to peacefully resolve the ongoing conflict.

“This is a courageous and historic step in the interest of a negotiated political solution to a three-year conflict that has caused so much misery and destruction,” Mr. Ban said in a statement.

“I look forward to the opposition’s expedited formation of a delegation that broadly represents the diversity of the Syrian opposition, including women,” he added.

The Geneva Conference on Syria, which will be chaired by Mr. Ban, will open on 22 January in Montreux, Switzerland. It will then move on 24 January to the Palais des Nations in Geneva where the Joint Special Representative of the UN and the League of Arab States for Syria, Lakhdar Brahimi, will facilitate the talks between the two Syrian parties.

The conference seeks to achieve a comprehensive agreement between the Syrian Government and the opposition for fully implementing the decision of an earlier Geneva conference in 2012, which called for the creation of a transitional government that would lead to the holding of elections.

“The conference is our long-awaited chance to end the violence and begin putting the country back together,” Mr. Ban told a news conference at UN Headquarters on Sunday evening, issuing a special appeal to the Syrian parties themselves to keep one goal in mind: the end of the suffering of the Syrian people and the beginning of a transition to a new Syria.

The UN has sent out invitations to the conference to more than 30 States, including the five permanent members of the UN Security Council, as well as to representatives of the Arab League, the European Union and the Organization of Islamic Cooperation.

Mr. Ban announced today that, after “intensive” meetings and telephone conversations with many global leaders and others who are part of the diplomatic effort on Syria, he has decided to also invite Australia, Bahrain, Belgium, Greece, the Holy See, Luxembourg, Mexico, the Netherlands, the Republic of Korea, and Iran to the 22 January gathering in Montreux.

“I believe the expanded international presence on that day will be an important and useful show of solidarity in advance of the hard work that the Syrian Government and opposition delegations will begin two days later in Geneva,” the Secretary-General stated, adding that he believes strongly that Iran needs to be part of the solution to the Syrian crisis.

Well over 100,000 people have been killed and more than 8 million others driven from their homes since the conflict erupted in March 2011 between the Government and various groups seeking the ouster of President Bashar al-Assad. 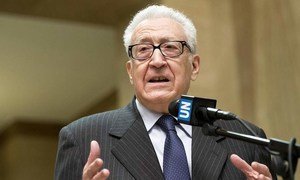 The United Nations and Arab League Joint Special Representative for Syria regrets the decision of one of the opposition groups, the National Coordination Committee (NCC), not to take part in next week’s international conference in Switzerland seeking to end nearly three years of civil war.