18 January 2014
Secretary-General Ban Ki-moon joined congregants at a New York City synagogue on Saturday to honour those who perished in the Holocaust, pay tribute to the survivors and call for collective action to prevent such horror from happening again.

“My hope is that our generation, and those to come, will summon that same sense of collective purpose to prevent such horror from happening again anywhere, to anyone or any group,” Mr. Ban said in his remarks at the Park East Synagogue Memorial Service in honour of the victims of the Holocaust.

The service comes ahead of the International Day of Commemoration in Memory of the Victims of the Holocaust. The Day is observed annually on 27 January, the anniversary of the liberation in 1945 of the Nazi concentration camp at Auschwitz-Birkenau, where over a million Jews and others perished during the Second World War.

“The horror at Auschwitz played a formative role in defining the ideals and objectives of the United Nations. Like all of my predecessors as Secretary-General, I am determined to prevent any other such catastrophes and grave violations of human rights,” said Mr. Ban.

He recalled his visit to Auschwitz last November, during which he was “profoundly saddened” by what he saw as he walked around the notorious death camp.

“I walked through the infamous ‘Arbeit Macht Frei’ gate, and stared with disbelief at rooms filled with the shoes, dolls, suitcases and other belongings of those who were killed. I saw the ‘Book of Names’ – a list identifying more than 4 million Jewish victims – which filled one of the exhibition rooms yet contained just a fraction of the war’s toll.

“I stood on the ramp where the transport trains unloaded their human cargo, where the awful moment of selection took place – where the quick flick of an SS commander’s index finger meant the difference between being killed immediately in the gas chambers and being kept alive only to be worked to death.”

He was especially moved, he said, by a video showing European Jewish life in the 1930s – scenes of family meals and visits to the beach, musical and theatre performances, weddings and other rituals – all of it “savagely extinguished.”

“Even today, the Holocaust is hard to grasp,” said the Secretary-General. “The cruelty was so profound; the scale so large; the camps spread so far and wide. The Nazi worldview was so warped and extreme – yet attracted so many followers.

“As we have seen from Cambodia to Rwanda to Srebrenica, we have not eliminated the poison that led to genocide,” he added.

Mr. Ban noted that in Syria, South Sudan and the Central African Republic, violence is taking on a “dangerous sectarian dimension,” and there is rising bias against migrants, Muslims, Roma and other minorities in Europe.

“Each of us has a role to play in combatting intolerance, incitement and the manipulation of ethnic or religious identity that we see in conflicts and political campaigns. All those involved in atrocities – whether head of State or head of militia – should be held accountable,” he stated.

“We must demand that those in power uphold their responsibilities to protect people. We must enact the laws and build the institutions that will uphold human rights.

“And at this moment of disturbingly high rates of youth unemployment, we must make special efforts to inculcate universal values in the world’s young people. Otherwise, they could prove easy prey for extremists.”

The 2014 observance of the International Day of Commemoration is centred around the theme “Journeys through the Holocaust” and recalls the various journeys taken during this dark period, from deportation to incarceration to freedom, and how this experience transformed the lives of those who endured it.

The featured speaker at the 27 January memorial ceremony at UN Headquarters will be filmmaker Steven Spielberg, whose Shoah Institute for Visual History and Education was a landmark in preserving survivor testimony.

The commemoration is organized by the United Nations and the Holocaust Outreach Programme, which has been working with teachers and students on all continents to promote tolerance and to warn about the consequences of anti-Semitism and other forms of discrimination.

Four UN personnel among those killed in Afghan suicide bombing 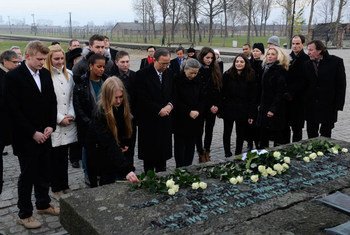 18 November 2013
Visiting the Nazi concentration camp at Auschwitz-Birkenau in Poland, where over a million Jews and members of other minorities perished during the Second World War, United Nations Secretary-General Ban Ki-moon today urged that its victims be honoured by ensuring dignity and fundamental freedoms for all.