The United Nations announced the allocation today of $86 million for emergency aid operations in some of the world’s worst, yet most neglected crises, allowing life-saving relief work to continue in 10 countries where needs are high but financial support is low.

The United Nations announced the allocation today of $86 million for emergency aid operations in some of the world’s worst, yet most neglected crises, allowing life-saving relief work to continue in 10 countries where needs are high but financial support is low.

“People living through some of the most critical humanitarian crises do not always receive the attention that they need,” UN humanitarian chief and Emergency Relief Coordinator Valerie Amos said. “These allocations will go to help millions of people who are caught in crises that have been forgotten or overshadowed by other emergencies.”

The money comes from the UN Central Emergency Response Fund (CERF) set up in 2006 with an annual target of $500 million to fund relief operations for both sudden-onset crises, such as those caused by a natural disasters or the outbreak of fighting, and chronic crises that have slipped below the humanitarian radar, like lingering refugee and hunger needs.

Some $11.5 million from the allocation announced today will help people in Mali who are still feeling the impact of the deadly inter-communal violence that left many displaced in 2012. A further $5.5 million will allow UN agencies in Myanmar to maintain operations in Kachin and Rakhine states, where thousands of families affected by fighting and displacement continue to need humanitarian aid.

CERF pools donor contributions into a single fund so that money is available to start relief work immediately when needs arise. Globally, the fund allocated almost $482 million in 2013, of which over $174 million went towards aid work in chronically under-funded crises.

The UN General Assembly established CERF to make funding for humanitarian emergencies faster and more equitable. Since then, 125 Member States and dozens of private-sector donors and regional Governments have contributed more than $3.35 billion to the fund. Since its inception, CERF has allocated more than $3.2 billion for humanitarian agencies operating in 88 countries and territories. 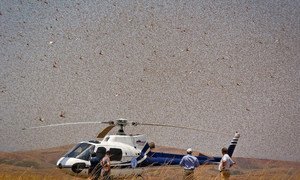 A locust control programme launched in Madagascar is making progress against an invasion of the voracious insects that is threatening rice and maize crops but requires an additional $17 million for the next two phases, the United Nations Food and Agriculture Organization (FAO) said today.