The United Nations today launched the International Year of Solidarity with the Palestinian People, with senior officials urging that the observance be used to redouble efforts to achieve a durable peace between Israel and Palestine.

“The coming year will be crucial to achieving the two-State solution,” Deputy Secretary-General Jan Eliasson said in his remarks to the UN General Assembly’s Committee on the Exercise of the Inalienable Rights of the Palestinian People.

Mr. Eliasson said Israeli and Palestinian negotiators are working hard towards a peaceful, comprehensive settlement of all permanent status issues. That means a settlement that ends the occupation that started in 1967 and which would end the conflict.

It also means securing an independent, viable and sovereign State of Palestine living alongside a secure State of Israel, where each side recognizes the other’s legitimate rights, he added.

“The Secretary-General and I urge all in the international community to work together to translate the solidarity and desire for peace expressed on this occasion into positive action for security and for justice.”

Last November, the General Assembly adopted a resolution proclaiming 2014 as the International Year of Solidarity with the Palestinian People, and requested the Committee to organize activities around the observance.

General Assembly President John Ashe told today’s meeting that he hoped the Year leads to “robust” support for the people of Palestine. “I am sure I speak for many when I say that I hope the Year helps foster an atmosphere of dialogue and mutual understanding between the two sides of this decades-long conflict,” he said.

“We live in an international context that requires cooperation among all parties, entities and beings to find solutions to the challenges facing the human family. There are no exceptions; Israel and Palestine must find agreement on the conditions in which they can live side by side in peace and security.”

UN officials, including Secretary-General Ban Ki-moon, have noted that 2014 could be a an important year in the Middle East peace process, if both sides are willing to take bold steps and refrain from actions that undermine progress in the peace talks that resumed last year.

“Now is the time for vision, compromise and deepening of respect. Let us make this year – 2014 – the decisive year for achieving peace between Israel and Palestine,” said Mr. Ashe. “I implore all those who have a stake in this outcome – Governments, international organizations, and people everywhere – to do their part.” 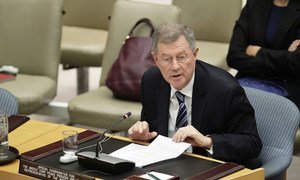 With another release by Israel of Palestinian prisoners set for later this month, the top United Nations envoy for the Middle East urged both sides to refrain from any actions which could undermine the prospects for progress in what has been an important year for the peace process.