Twenty years after the Rwanda genocide, where “the consequences of failing to heed the warning signs were monumentally horrifying,” the world must respond early to the risk of mass atrocities amid mounting religious and ethnic polarization and demonization, a United Nations special event warned today.

“We must never forget the collective failure to prevent the Rwandan genocide,” Deputy Secretary-General Jan Eliasson told participants at UN Headquarters in New York. “Repeating the phrase ‘never again’ is in itself a sign of continued failure.”

The event, formally called “Understanding early warning of mass atrocities twenty years after the genocide in Rwanda,” was co-organized by the UN Department of Public Information (DPI), the Permanent Mission of Rwanda and the non-governmental Global Centre for the Responsibility to Protect.

The special event comes in the run-up to the 20th anniversary commemorations of Rwanda genocide, when in a mere 100 days beginning on 7 April, 1994, more than 800,000 Tutsis and moderate Hutus were massacred by Hutu militants. Among today’s attendees was retired Canadian Lt. Gen. Roméo Dallaire, the head of the UN peacekeeping force in Rwanda at the time, who had appealed in vain for the world to take action before it was too late.

“If we are to prevent future tragedies, progress requires leadership and courage to speak out at every level – the kind of leadership and the kind of courage, that Roméo Dallaire showed 20 years ago,” Mr. Eliasson said. “It requires action by Governments to uphold their fundamental responsibilities – and by the international community when that does not happen.

“As never before, the people of the world are measuring the performance of the United Nations by our efforts to protect human rights and civilian populations.”

He stressed the importance of the role civil society in preventing atrocities, improvements within the UN, including the “responsibility to protect” concept endorsed in 2005, and the commitment of many individuals, including UN staff in the field, who are providing early warning and supporting local and national efforts to protect human rights and stop conflicts from escalating.

“As a result, the United Nations and the international system are now better prepared to anticipate, prevent and, I would strongly hope, respond to crises,” he said. “We need look no further than South Sudan today for an example of dedication and innovation in protecting people.

“In spite of a tragically great number of people being killed in the conflict, thousands of civilians are alive today because they have sought shelter inside United Nations facilities and have been provided with protection and assistance.”

Some 65,000 civilians are currently being sheltered in 10 UN bases in South Sudan where well over 1,000 people, possibly thousands, have been killed and more than 400,000 have been driven from their homes since conflict erupted between President Salva Kiir’s forces and those of former deputy president Riek Machar a month ago today.

Mr. Eliasson, noted, however that the lessons learned over the years have not always been followed by action. “Since the tragedy in Rwanda, hundreds of thousands of people have died in mass atrocities and tens of millions have been displaced,” he said. “Over the last few weeks alone, men, women and children have been slaughtered not only in South Sudan but also in the Central African Republic (CAR) and in the nightmare of Syria.”

He stressed that the wider impact has been disastrous for peace, security and the economic and social development of entire regions. “This is all the more so because of the deeply worrying and growing divisions along religious or ethnic lines that we are witnessing in many nations,” he warned.

“The demonization - I use that word intentionally - of people of different faiths or ethnic belonging is one of the most toxic deeds of which human beings are capable. It undermines the fundamental principle that must lie at the heart of human interaction – and in fact of the United Nations - the incontrovertible truth of every human being’s equal value.

“When people are killed or violated in the name of religion, race or ethnicity, everybody’s humanity is diminished. We are all brutalized – victims and perpetrators as well as bystanders.”

Among the actions the UN is taking to prevent genocide, Mr. Eliasson cited Secretary-General Ban Ki-moon’s “Rights up Front” Action Plan to strengthen the Organization’s ability to prevent large-scale violations of human rights, including the imperative for an early response to the risk of mass atrocities and the realization that prevention is a common responsibility of the entire UN system.

“We can best meet this responsibility when we in the United Nations system realize the potential of our combined mandates and roles and when we operate as ‘one’,” he said, stressing the current urgency of preventing the grave violations of human rights in the Central African Republic and South Sudan from turning into mass atrocities.

Lt. Gen. Dallaire, who was appointed by then Secretary-General Kofi Annan to the UN advisory board on the Prevention of Genocide, told the meeting that “the most easily identifiable warning tool out there” that a society is about to implode and possibly degenerate into genocide is the massive use of child soldiers “in the thousands upon thousands as the primary weapon of war, not as an adjunct.

“As the primary instrument of war from up front with AK 47s to machetes to all the way back to girls being abused and used as sex slaves and bush wives by the adults. It is in my opinion the instrument of warning,” he stressed, citing Syria, CAR, Mali and the Democratic Republic of Congo (DRC) as instances where this has happened. 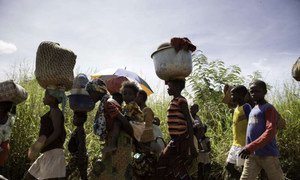 Urgent national and international action is crucial to prevent the Central African Republic (CAR) from plunging into full-scale sectarian conflict and protect civilians, particularly women and children, from atrocities that have already killed thousands and driven 750,000 others from their homes amid reports of rape and mutilation, United Nations human rights officials have warned.