The meeting represents “an unprecedented opportunity for member States to advance the fight against impunity in this violence-stricken region,” High Commissioner for Human Rights Navi Pillay said of the Fifth Summit of the Heads of State and Government of the International Conference on the Great Lakes Region (ICGLR).

Noting that the goal of the Summit is to promote peace, security, stability and development in the region, Ms. Pillay noted that it will only be achieved “if those responsible for violence and illegal economic exploitation are held to account.”

She noted that Rwanda and Uganda are currently hosting senior military officers of the M23 rebel group who are alleged to be among the worst perpetrators of human rights violations in the Democratic Republic of the Congo (DRC).

“If they continue to elude justice in neighbouring States, they remain a security threat, hampering efforts for sustainable peace and development in the region,” the High Commissioner said, noting that they are accused of mass killings, rape and recruitment and use of children.

These countries are among the 11 who signed the Peace, Security and Cooperation Framework for the DRC and the Region back in February 2013, and who made formal commitments to neither harbour nor protect any person accused of international crimes or who falls under the United Nations sanctions regime.

Dubbed a “framework of hope” by the Secretary-General’s Special Envoy for the Great Lakes Region, Mary Robinson, who is among the UN officials attending the Summit in Luanda, the UN has said the accord remains the best chance to achieve sustainable peace, security, cooperation and development in the Great Lakes Region.

In addition to former M23 combatants, Ms. Pillay noted that people suspected of active participation in the 1994 Rwanda genocide are still sheltering from justice in the DRC two decades later.

“I urge States to stop turning a blind eye to the presence of people on their territory who are suspected of committing very serious crimes, and take the opportunity of the summit to address the question of judicial cooperation and ensure accountability for international crimes and serious human rights violations committed throughout the region,” Ms. Pillay said in a news release from the Office of the High Commissioner (OHCHR).

Senior representatives of the High Commissioner have been making positive progress in recent months with Congolese authorities on impunity-related issues, including follow-up of the United Nations 2010 ‘Mapping Report’ on the most serious violations of human rights and international humanitarian law committed in the DRC between 1993 and 2003.

“I am encouraged by recent efforts of the Congolese authorities to hold accountable high-ranking perpetrators of serious human rights violations including sexual violence,” she said. “This trend must continue and include cross-border cooperation. The fight against impunity requires an active and real commitment by all States in the sub-region.”

Ms. Pillay also noted that the Special Rapporteur on transitional justice has requested invitations for country visits to a number of Members States of the ICGLR, including the DRC and Rwanda.

Extending an invitation to the Special Rapporteur would be one step towards living up to the commitment to fight impunity, she said. 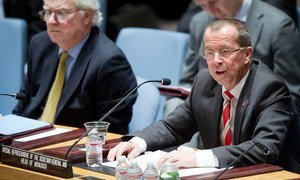