Visiting with Syrian refugees in northern Iraq, Secretary-General Ban Ki-moon today called “heart-breaking” what he saw in Kawrgosik camp, saying he was particularly saddened to see so many young children, women and vulnerable people suffering from “this man-made tragedy.”

“I am here to send our strong solidarity and support to all the refugees who came from Syria, on behalf of the United Nations and the international community,” said Mr. Ban alongside the High Commissioner for Refugees, Antonio Guterres, and Valerie Amos, Under-Secretary-General for Humanitarian Affairs and UN Emergency Relief Coordinator.

“We are also here to listen to the concerns and aspirations of all the refugees here,” the UN chief said, recalling the people with whom he met in their tents. “Families shared their struggles to survive, find their loved ones and cope with the sadness of those who have been lost.”

In a private meeting in Erbil with the President of the Kurdistan Region, Massoud Barzani, and Prime Minister Nechirvan Barzani, Mr. Ban urged the Government to keep the border open for refugees fleeing the conflict. 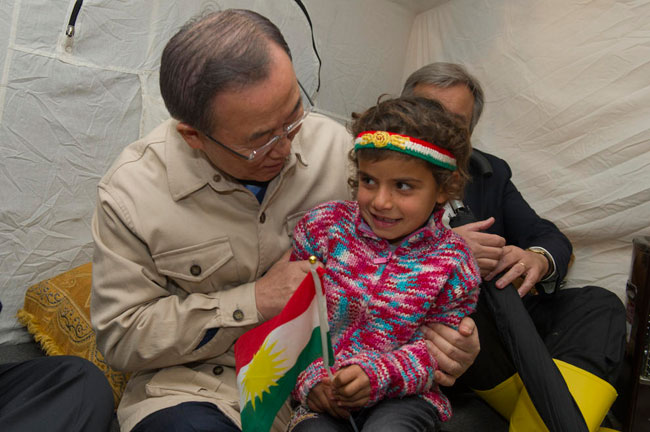 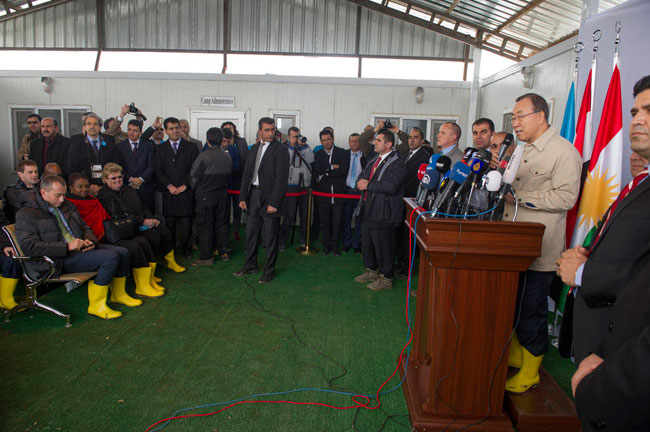 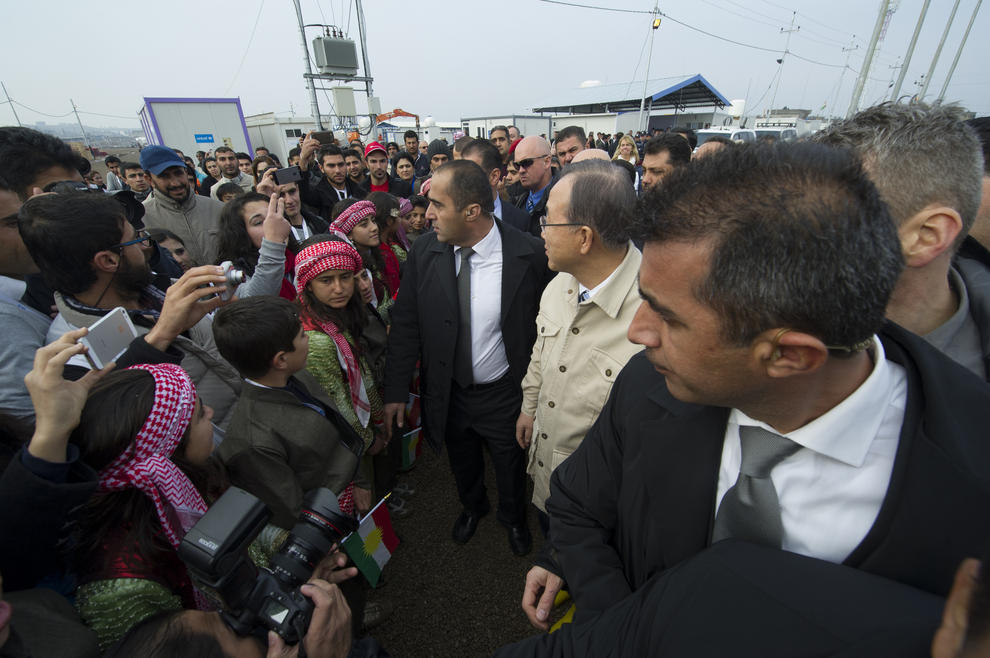 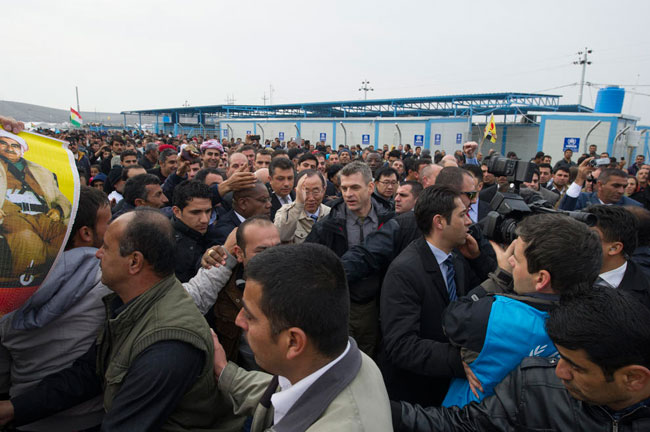 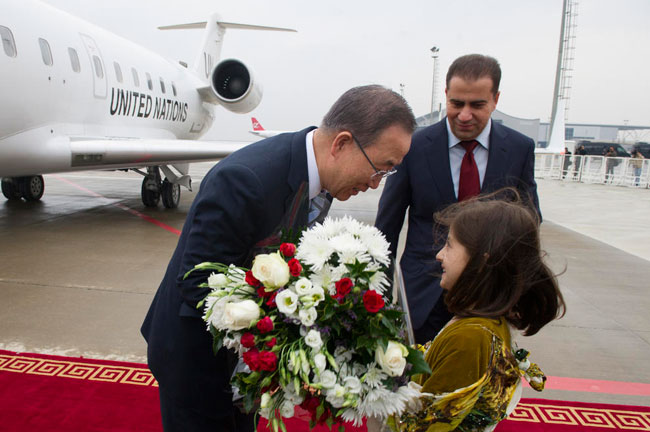 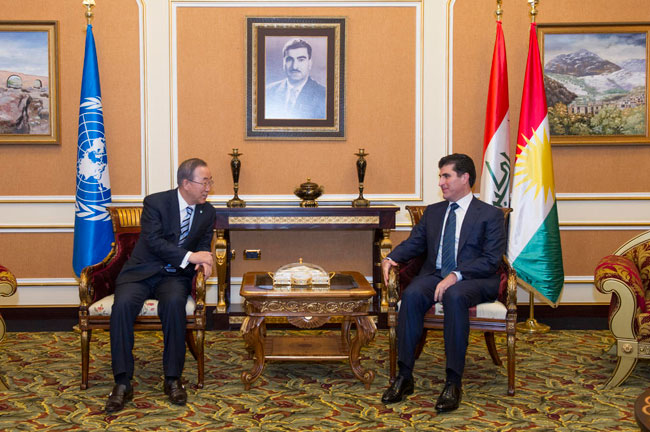 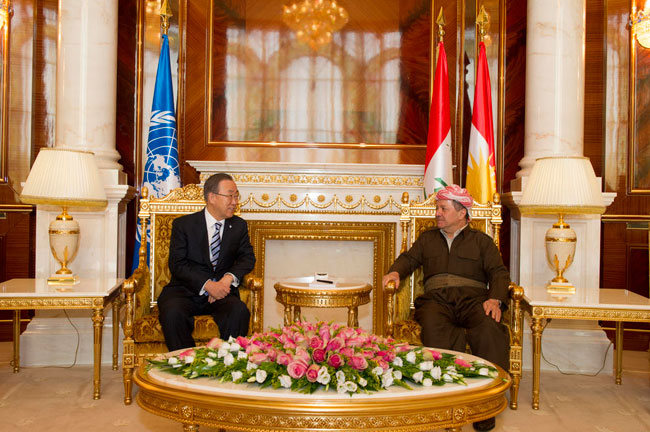 Secretary-General Ban Ki-moon visits the Kawrgosik Refugee Camp near Erbil, in the Kurdistan region of Iraq, where more than 200,000 Syrian refugees are being hosted by the regional government. UN Photo/Eskinder Debebe

The request was echoed by Mr. Guterres, who said it “breaks my heart” to see Syrian refugees risking their lives to escape from the country, such as the reported 200 people who drowned in a Nile River ferry accident.

“Your border is open,” he said, urging Governments to take in refugees and assume full-burden sharing with neighbouring countries “in the noble need to respond to this dramatic situation.”

Reiterating the need for a political solution to the conflict in Syria which in nearly three years killed well over 100,000 people and drove more than 8 million others from their homes, Mr. Ban also emphasized the urgency of more humanitarian aid.

He is in the region ahead of tomorrow’s humanitarian pledging conference for Syria, which he will chair. The conference, hosted by Emir Sheikh Sabah al-Ahmad al-Sabah in Kuwait City, aims to raise $6.5 billion through 2014 for displaced Syrians and those seeking refuge in neighbouring countries, including Iraq.

Of that amount, $542 million will be applied in humanitarian action in Kurdistan and in support to the local communities, according to Mr. Guterres.

“We will try to mobilize all the necessary humanitarian assistance for these people – tents, water, sanitation, education – and all that they need, we will provide,” Mr. Ban told journalists gathered at the refugee camp. The UN is also providing winterization assistance amid what meteorologists predict could be the region’s harshest winter in a century.

Next week in Geneva, Mr. Ban and the Joint Special Representative of the UN and the League of Arab States for Syria, Lakhdar Brahimi, will host a long-sought conference aimed at finding a political solution to the conflict.

More than 30 nations have been invited to attend the conference, which be held in Switzerland in two parts, with the opening session in Montreux on 22 January 2014, and then moving on 24 January to the UN office in Geneva. It will be the first time the Syrian Government and the opposition meet at a negotiating table since the conflict started in March 2011.

Mr. Ban expressed optimism about its prospects and noted that both he and Mr. Brahimi were working “very hard” with international partners to bring peace through the negotiations.

“I sincerely hope that with the solidarity of the international community and strong support for a Syrian-led peace process, these refugees will be able to return to their homes with hope and dignity,” he said.

“Until then, the UN will lead this campaign of humanitarian assistance and peace process will all of you.”

♦ Receive daily updates directly in your inbox - Subscribe here to a topic.
♦ Download the UN News app for your iOS or Android devices.
Iraq|syria