“It is the concrete implementation of national commitment in the DRC and commitments at the regional level that would lead to sustainable peace in the region, and this cannot wait any longer,” the Secretary-General’s Special Envoy for the Great Lakes Region, Mary Robinson, said in a briefing to the Security Council.

Addressing the 15-member body by video link from the Congolese capital, Kinshasa, Mrs. Robinson said that the positive atmosphere that prevailed last month in the aftermath of the defeat of the M23 rebel group has “vanished” and that the region is going through a period of renewed turbulence.

This has been marked by deadly attacks in eastern DRC by the Allied Democratic Forces (ADF) rebel group, the ongoing crisis in Central African Republic (CAR) and the eruption of fighting in South Sudan.

Amid this fragility in the region, Mrs. Robinson said that the Peace, Security and Cooperation Framework for the DRC and the Region – signed by 11 nations in February 2013 – remains “the best chance” to achieve sustainable peace, security, cooperation and development in the Great Lakes Region.

“However, it is essential that the pace of its implementation be increased in order to maximize its impact,” she said of the accord.

At the national level, she said efforts to reform the security sector should be significantly increased and accelerated – which would be essential for expanding State authority, particularly in eastern DRC. Another priority is the swift implementation of an effective programme to disarm and reintegrate former M23 combatants.

The envoy noted that at the regional level, signatory countries must also begin implementing their commitments, including working towards further economic integration and concrete confidence-building steps such as ensuring that no one is harbouring individuals responsible for grave human rights violations or assisting armed groups.

The Framework agreement is at a crucial juncture, Mrs. Robinson stressed. “However, what is most important for meaningful progress is the immediate implementation of all commitments at the national and regional levels in order to bring about concrete peace dividends and lasting life improvements to the people in the region.”

Martin Kobler, the Secretary-General’s Special Representative for DRC, told the Council that the signing last year of the Framework was a major milestone, along with the creation of the intervention brigade within the UN peacekeeping force, known as MONUSCO.

“With the Force Intervention Brigade and our unmanned aerial vehicles, all armed groups are aware now that we have the will and the means to take robust action at any time,” said Mr. Kobler, who is also head of MONUSCO.

“In the coming weeks, we will finalize the review of our military deployment across eastern Congo. We will then have a more flexible force. We need it to be more agile, ready to deploy when it is needed and where civilians are threatened, to take on the threat.”

At the same time, he noted that peace in eastern DRC can only be durable if its root causes are addressed. “Restitution of State authority alone is not enough. Only regional cooperation and good governance will provide the peace dividend the population is expecting,” he said.

In this regard, he cited the need for legalizing and regulating the current exploitation and trade of conflict minerals in order to substantially increase state revenues.

“Thus, Congo’s natural wealth will help finance the economic and social challenges of the country. Obviously, this has to be done in partnership with the Government of the DRC and neighbouring States, the private sector and with the assistance of the international community.” 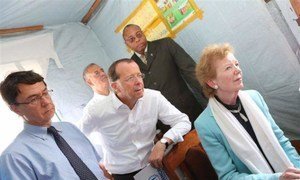 The Security Council today voiced concern over the security situation in the Democratic Republic of the Congo (DRC) and called on all parties in the Great Lakes region to fulfil their commitment to achieve lasting peace.