United Nations Emergency Relief Coordinator Valerie Amos sounded the alarm today on behalf of more than 9 million desperate Syrians – particularly people trapped in areas cut off from aid by months of fighting between Government and rebel forces – and called on the world to also do more for those that have been displaced by violence or otherwise impacted by the ongoing crisis.

Ms. Amos issued her call to action, spotlighting the dire humanitarian situation affecting 9.3 million Syrians, as she wrapped up a visit to the war-torn country's capital, Damascus, today. The top UN relief official held talks with members of the Government and humanitarian partners about the plight of communities which have been blocked by Government or opposition forces and have not been reached with aid for months.

“I am particularly worried about the reports of starvation,” she said, and, according to a news release issued by the UN Office for the Coordination of Humanitarian Affairs (OCHA), which she heads, Ms. Amos also discussed plans to scale up aid operations in 2014 to get more help to the people who need it most.

Speaking ahead of the High-Level Pledging Conference for Syria, which will be held on 15 January in Kuwait, Ms. Amos called for the international community to do more to help those who have been forced from their homes by the violence and are living in desperate conditions.

More than 100,000 people have been killed and millions driven from their homes, 2 million of whom are seeking refuge in neighbouring countries, since the conflict first erupted in March 2011.

“The world must do more for all the people who are displaced,” she declared, adding: “Many families are living in abandoned buildings, schools or in makeshift shelters, without enough food, clean water or medicine. We must help them to get through this very cold winter.”

Speaking after visiting a shelter run by the Syrian Arab Red Crescent in Jaramana in Rural Damascus, she also noted that the people she had met “have lost family and friends, their homes and jobs.”

“But they were glad to be safe inside the shelter, with enough food and water for their families. Many people are in even worse conditions, and all are battling with deteriorating health and worries about their children's futures.”

Ms. Amos also met Palestine refugees at a school run by the UN Relief World Agency for Palestine Refugees in the Near East (UNRWA), which is now home to displaced families. More than 80 per cent of Palestine refugees inside Syria need humanitarian aid, according to OCHA.

She also held talks with the Syrian Government about protection of civilians and emphasized the need to build on steps to reduce the impact of violence on civilians, like the recent ceasefires which allowed evacuations from the Old City of Homs and from Adra Umaliyeh in Rural Damascus. “I recognized the steps taken to approve visas, which will enable us to increase capacity on the ground. But we need to do more in a crisis of this magnitude,” she said. 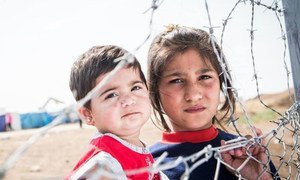