The United Nations human rights office today expressed concern about a decision by the Malaysian Ministry of Home Affairs to declare illegal a coalition of 54 mainly non-Islamic civil society groups focused on human rights known by the acronym COMANGO.

“We call upon Government of Malaysia to amend the Societies Act 1966, maximize the space for human rights activists and organisations to operate freely, and ensure that they can conduct their legitimate activities without intimidation or harassment,” the spokesperson for the UN High Commissioner for Human Rights, Rupert Colville, told journalists in Geneva.

The COMANGO coalition submitted joint reports to both the UN Human Rights Council’s 2009 and 2013 Universal Periodic Reviews (UPR) of the situation in Malaysia.

Since its submission to the second cycle of the UPR, which took place on 24 October 2013, the coalition has reportedly been subjected to a series of harassment and threats, allegedly by both State and non-State actors. The coalition has been accused of attacking Islam and of spreading beliefs that do not conform to Islamic teachings.

The Malaysian Ministry of Home Affairs declared in a press statement on 8 January that COMANGO promotes rights which are not in line with Islam, and is therefore illegal.

The statement also noted that only 15 of the 54 organizations are registered under the Societies Act 1966.

“We are concerned by what appears to be an act of reprisal against COMANGO for its engagement with international human rights mechanism,” the spokesperson added.

UN Secretary-General Ban Ki-moon, High Commissioner Navi Pillay and the Geneva-based Human Rights Council have persistently called for the protection of individuals and members of groups that cooperate with the UN, its representatives and mechanisms in the field of human rights from acts of intimidation or reprisal. 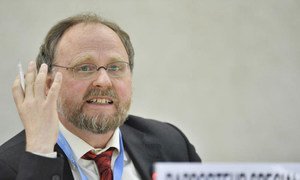 Several independent United Nations human rights experts today urged the Malaysian Government to reverse its decision to ban a Catholic publication from using the word ‘Allah’ to refer to God, warning that the case may have far-reaching implications for religious minorities in the country.