FAO/Domaine de Kalahari
The Sterile Insect Technique (SIT) involves the release of sterile males by air to reduce the breeding of tsetse flies.

10 January 2014
A United Nations-led campaign against the tsetse fly, which transmits a disease that devastates livestock, in the Niayes area near Senegal’s capital, Dakar, has made giant strides towards eradicating the pest’s population.

Through broad cooperation between the UN Food and Agriculture Organization (FAO) and the International Atomic Energy Agency (IAEA), the project is taking a leading role via using the Sterile Insect Technique (SIT), a method of pest control using area-wide mass releases of sterile insects to reduce reproduction in a field population of the same species, to tackle the tsetse fly and reduce disease, according to a news release issued today.

Jorge Hendrichs, chief of the FAO/IAEA SIT programme, said his team at the Insect Pest Control Laboratory at the joint programme’s Agriculture and Biotechnology Laboratories in Seibersdorf, Austria, offers a full service of applied research, training, field validation and operations and laboratory backup, with activities reinforcing each other in a type of "feedback loop."

For the Senegal operation, the sterile flies are mass-produced at a facility centre in Burkina Faso and shipped to Senegal, Mr. Hendrichs explained, adding that: "At first, the flies arrived in bad condition. We had to improve quality control, make adjustments to shipment and logistics, establish back-up colonies of the fly, and so on."

"Since the project started, there is already less disease,” said Baba Sall, project manager and Head of the Animal Health Section in the Senegalese Ministry of Livestock. “It has not only reduced the tsetse but also ticks, which cause lots of other diseases in the area. We have noticed overall better health of the herds."

The Niayes area of Senegal has a coastal micro-climate suitable for exotic breeds of cattle, which produce more milk and meat than domestic stock.

Unfortunately, the area is also home to the tsetse fly which transmits trypanosomosis. Often lethal, the disease reduces fertility, weight, meat and milk production, and makes cattle too weak to be used for ploughing or transport.

However, once the eradication of the tsetse fly is complete, the farmers in the Niayes area will earn $1.6 million more annually as they will spend less on treating animals and gain more profit from selling milk and meat, a Government study estimates.

The SIT not only suppresses the fly population by over 99 per cent in six months, but it also avoids the use of pesticides and reduces environmental contamination after an initial phase of insecticide-based suppression.

"We expect to announce the tsetse fly eradicated in the first block in mid-2014,” said Mr. Sall, “We have not captured any wild flies in our traps since March 2012, so they are almost finished there."

Around 37 African countries are affected by the tsetse fly, and trypanosomosis kills around 3 million livestock per year. The FAO/IAEA SIT programme supports 14 African nations in their efforts to eradicate the pest.

Australia: UN agency concerned by reports that asylum-seeker boats forced back to Indonesia 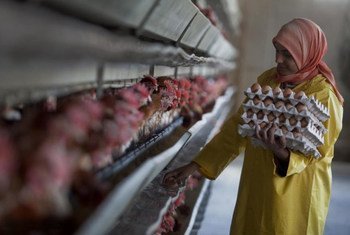 16 December 2013
About 70 per cent of new diseases infecting humans in recent decades have come from animals, the United Nations food agency today reported, warning that it is getting easier for diseases jump species and spread as the population, agriculture and food-supply chains grow.