Secretary-General Ban Ki-moon today called on the international community to provide “more political attention, more resources, more support” for the United Nations as it faces “an overflowing inbox of conflicts and disasters of growing severity, frequency and complexity.”

“The situations in Syria, South Sudan and the Central African Republic have gone from bad to worse,” he said in his first news conference of the new year, highlighting not only the immediate need to end the fighting in those countries but also the larger imperatives of 2014 in the run-up to reaching the UN’s anti-poverty Millennium Development Goals (MDGs) and achieving a global accord to counter climate change.

The year 2015 is the deadline for attaining both targets.

Mr. Ban stressed that the UN is doing its utmost to ease the suffering and provide life-saving aid in all three strife-torn countries, staying and delivering assistance wherever it can even as people continue to flee their homes and countries.

“These are avoidable tragedies in which millions of civilians are paying an unconscionable price,” he said. “I am especially alarmed by the spread of sectarian animosity, and by the dangerous regional and global spillover effects. Years of development are at stake. A generation of young people is at risk.”

Mr. Ban said UN personnel are all showing “tremendous courage and professionalism in volatile conditions” in all three countries, “but humanitarian assistance, vital as it is, can be only part of our response.

“The international community must pull together to help these countries find the path of peace. Together, we must send a strong message that there will be accountability for the killing, raping, chemical weapons attacks and other atrocious crimes that have been committed,” he added.

On Syria, where well over 100,000 people have been killed and 8 million others driven from their homes, 2 million of them as refugees in neighbouring countries, since conflict erupted almost three years ago between the Government and various groups seeking the ouster of President Bashar al-Assad, Mr. Ban called for an immediate end to all violence, including the Government’s use of barrel bombs and other heavy weapons that kill and maim indiscriminately.

“All parties must improve humanitarian access to people in besieged areas,” he stressed. “The situation in Eastern Ghouta (near Damascus) is shocking: 160,000 people have gone without aid for more than a year. The United Nations is prepared to enter the area assistance, but we need the full cooperation of the Syrian Government.”

He called for strengthening strengthen the African-led peacekeeping mission in the Central African Republic (CAR), where thousands of people are estimated to have been killed, nearly 1 million driven from their homes, and 2.2 million, about half the population, need humanitarian aid in a conflict which erupted when mainly Muslim rebels launched attacks a year ago and has taken on increasingly sectarian overtones as mainly Christian militias have taken up arms.

And he demanded that there be no further delays in ceasing hostilities in South Sudan, where well over 1,000 people have been killed and some 300,000 others driven from their home since fighting erupted between Government and opposition forces less than a month ago. He noted that he called President Salva Kiir yesterday and urged him to immediately release political prisoners.

“In each of these crises, humanitarian needs are escalating and funding is falling short,” Mr. Ban said. “I urge all donors to show their solidarity, including at the humanitarian pledging conference for Syria and the affected neighbours that I will chair next Wednesday in Kuwait.”

Turning to other current and former world hotspots he pledged UN support for the people of Afghanistan at a time of transition with the withdrawal of the International Assistance Force (ISAF) by the end of the year, and he called on Israelis and Palestinians to “make decisive progress in resolving their conflict and drawing back from a perilous status quo.”

He also called on the Government and opposition in Thailand to resolve their differences, voicing fears that the situation could escalate.

On a more positive note, he noted that 2014 marks a milestone in Sierra Leone, the West African country once submerged by a vicious civil war and horrendous human rights abuses, as the UN mission prepares to close – “a measure of the tremendous distance the country has travelled since the years of conflict” over a decade ago.

“The long engagement of the United Nations in Sierra Leone demonstrates the value of staying the course through the hard process of keeping, consolidating and building peace,” Mr. Ban said.

Other tasks facing the UN this year include preparing for the crucial 2015 deadline for the MDGs and making “clear progress” on the post-2015 development agenda by setting sustainable targets and providing the financial means to attain them.

“And if we are to adopt a new global agreement on climate change in 2015, we need to arrive in Lima (Peru) in December of this year with a solid draft for negotiation. The climate summit I will host (in New York) in September aims to advance bold action on the ground and mobilize political will for an ambitious agreement.”

Mr. Ban concluded by stressing that last year’s use of chemical attacks in Syria recalled the horrors of the “fields of Flanders” during World War I. “In this year that marks the 100th anniversary of the First World War, we will strive to push the boundaries of diplomacy and collective action.

“Despite crises and concerns, 2014 also brings major opportunities to build a safer, more just and prosperous world. I am determined to make this a year of progress for people and the planet.”

♦ Receive daily updates directly in your inbox - Subscribe here to a topic.
♦ Download the UN News app for your iOS or Android devices.
Ki-moon

Secretary-General-designate pledges his commitment to deal with ‘daunting challenges’

Engagement and diplomacy before confrontation, says Ban Ki-moon of his style 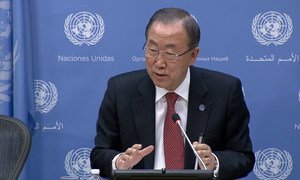 With 2013 marked by a deterioration “beyond all imagination” in the Syrian conflict and the “imminent danger of mass atrocities” looming in the Central African Republic (CAR), Secretary-General Ban Ki-moon today called on world leaders to follow the example of the late South African President Nelson Mandela in making 2014 the year of protecting people.