10 January 2014
United Nations independent human rights experts today urged the Spanish Government to reconsider its decision to extradite Alexsandr Pavlov, who oversaw security for a Kazakh businessman and prominent opposition leader, on grounds that he may be tortured or receive an unfair trial if extradited.

“All countries must ensure that extradition does not put an individual at risk of persecution, torture, inhuman or degrading treatment,” the UN Special Rapporteur on torture, Juan E. Méndez, said. “Spain must adopt all necessary measures to safeguard Mr. Pavlov's rights and physical integrity.”

In a news release from the Office of the High Commissioner for Human Rights (OHCHR), the UN Special Rapporteur on the human rights of migrants, François Crépeau, stressed that the human rights of foreigners are no less important than the rights of citizens in any country, “The question we should ask ourselves is: would we as confidently send a citizen to the same fate?”

Mr. Pavlov, who formerly worked for opposition figure Mukhtar Ablyazov, was detained by Spanish authorities in 2012 on an Interpol warrant requested by Kazakhstan, which accuses him of financial and terrorism-related crimes.

On 18 November 2013, Spain's high court, the Audiencia Nacional, approved Mr. Pavlov's extradition, but the decision now rests with the Council of Ministers.

The two UN experts have called on the Council to consider Mr. Pavlov's appeal based on the substantial fears that he might be tortured or unfairly tried.

Since July 2013, the two human rights experts, together with the UN Special Rapporteur on the independence of judges and lawyers, Gabriela Knaul, have engaged with the Spanish Government concerning Mr. Pavlov's case.

While the Government has responded to the experts' appeals it hasn't given any indication that the extradition will be halted, according to OHCHR.

Australia: UN agency concerned by reports that asylum-seeker boats forced back to Indonesia 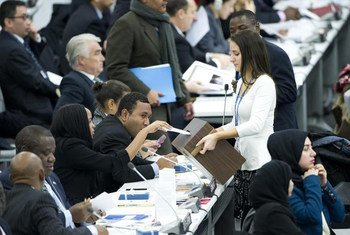