For the second consecutive month, the cost of food worldwide remained nearly unchanged in December, with overall global food prices for 2013 among the highest on record, the United Nations food agency today reported.

In a news release, the UN Food and Agriculture Organization (FAO) said its most recent Food Price Index averaged 206.7 points, nearly the same as the 206.4 in November.

The FAO’s Index measures the monthly change in international prices of a basket of 55 food commodities, including meat, dairy, sugar, and cereals.

A sharp increase in dairy prices and high meat values balanced out a steep decline in sugar quotations and lower cereal and oil prices, the UN agency summarized.

The price index of dairy in December averaged 264.4 points, a rise of 13.2 points over November. Demand for milk powder in China among the factors for the strong demand.

The gain is part of an upward trend. In 2013, the dairy price index averaged 243, its highest annual average ever, FAO said.

The price for meat is also up, driven in particular by demand from China and Japan. The price index averaged 188.1 points in December, in line with historically high levels in 2013 overall, the UN agency reported.

Meanwhile, record harvests kept cereal prices down during the year, particularly wheat and maize. The Cereal Price Index averaged 219.1 points, down as much as 17 points or 7.2 per cent from 2012, according to the latest figures.

The grains index for December dipped 2.8 points from the previous month to 191.5 points, its lowest since August 2010.

Sugar also slipped, 15.8 points from November to 234.9. A boom sugarcane harvest in Brazil, the world’s largest producer and exporter, along with good harvests in Thailand and China, kept prices down. 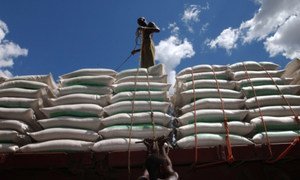 Improved supplies and a recovery in global inventories of cereals has led to less price volatility than in recent years, the United Nations Food and Agriculture Organization (FAO) said today, adding that food prices over the past month rose slightly, driven by higher sugar prices.