Timor-Leste, Asia-Pacific’s youngest country, today became the region’s first to launch a national campaign under the United Nations Zero Hunger Challenge, which seeks to ensure universal access to food in the face of looming threats such as climate change.

Timor-Leste, Asia-Pacific’s youngest country, today became the region’s first to launch a national campaign under the United Nations Zero Hunger Challenge, which seeks to ensure universal access to food in the face of looming threats such as climate change.

“Hunger is an unforgivable development failure,” Noeleen Heyzer, Executive Secretary of the UN Economic and Social Commission for Asia and the Pacific (ESCAP), said at the launching ceremony in the National Parliament in Dili, the capital. “It is the single greatest obstacle to creating the inclusive, sustainable, and resilient future we want for all the people of Asia and the Pacific.”

“Working together, hunger can be beaten and the developing countries of Asia and the Pacific, with the support of our development partners, are taking the lead in making hunger history,” said Ms. Heyzer, who is also Secretary General Ban Ki-moon’s Adviser for Timor-Leste, which the UN shepherded to independence in 2002 after it voted to secede from Indonesia.

Tmor-Leste has a population of some 1.1 million people, but the Asia-Pacific region is home to nearly two-thirds of the world’s chronically food insecure, with some 575 million thus classified.

Mr. Ban launched the Zero Hunger Challenge in 2012 with the goal of creating a future in which all people enjoy their fundamental right to food, and where livelihoods and food systems are resilient enough to withstand multiple shocks, including the impacts of global climate change.

Its five specific objectives are to make sure that everyone in the world has access to enough nutritious food all year long; end childhood stunting; build sustainable food systems; double the productivity and income of smallholder farmers, especially women; and prevent food from being lost or wasted.

Asia and the Pacific saw the regional launch of the Challenge at ESCAP’s 69th Commission session in Bangkok last April but Timor-Leste is the first country to pilot the creation of a national action plan.

The region has made good progress in reducing the proportion of the population suffering from chronic hunger, which has declined from more than 24 per cent in 1990-92 to 13.5 per cent in 2011-13, but it is still home to more than 553 million undernourished people with underweight children still comprising more than 34 per cent of all children in South and South-West Asia.

According to the preliminary results of a new study in Timor-Leste, malnutrition rates have been significantly reduced from about 44.7 per cent in 2010 to 38.1 per cent last year, with chronic malnutrition in infants under 23 months reduced from 49 per cent to 38 per cent. But much work remains to be done as more than 50 per cent of children under five - almost 100,000 - are still stunted, according to the UN Children’s Fund (UNICEF).

“As the Secretary-General’s Special Adviser for Timor-Leste, I am very pleased and proud that the first national launch of the Zero Hunger Challenge campaign in Asia and the Pacific is being hosted here today in Dili,” Ms. Heyzer told the inaugural ceremony attended by Prime Minister Xanana Gusmão. “It is another demonstration of the Government’s commitment to addressing the urgent and very real challenges of hunger in Timor-Leste.

“The United Nations Country Team in Timor-Leste will support the efforts of the Government in this area, proposing interventions and policies which address immediate and underlying causes of malnutrition and food insecurity.”

Underlining the challenge confronting Asia and the Pacific, UN Food and Agriculture Organization (FAO) Regional Representative Hiroyuki Konuma told last April’s Bangkok meeting that despite efforts to reduce hunger, and the rapid economic growth in much of Asia, progress in eradicating hunger has been very slow.

“One in every eight people in Asia-Pacific lacks the most basic human right because they are victims of chronic hunger,” he said. “Nearly two-thirds of the world’s chronically hungry people live in the Asia-Pacific region.” 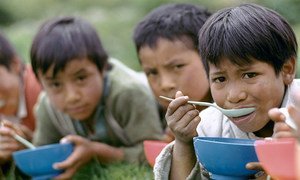 United Nations officials are marking Human Solidarity Day today by calling for joint action to reach the globally agreed goals of reducing extreme poverty, hunger, disease and other social and environmental ills by 2015, and to create a more sustainable future for all.