With a nod to multiculturalism, UN hosts ‘Project Runway’ finale

Judges of ‘Project Runway All Stars’ Season 3. The season finale, filmed at the UN Headquarters in New York, airs on 9 January on the Lifetime Network. Photo courtesy of Lifetime Network
8 January 2014

The United Nations is in fashion this winter. Fashionistas descended on the world body’s iconic New York Headquarters recently for the filming of the season finale of “Project Runway All Stars,” – which airs tonight on Lifetime – where three finalists showcase original clothing lines inspired by their family heritages.

“To be in a place with such history [and] so dynamic, made the show even more spectacular,” said co- host and UN Children’s Fund (UNICEF) National Ambassador, Alyssa Milano. She called the 39-floor Secretariat building, which recently underwent a more than $1 billion renovation, “an absolutely beautiful aesthetic backdrop for the runway.”

“I don’t think there are any designers who can say that they actually showed a collection in the UN,” she added.

‘Project Runway All Stars’ is a weekly United States-based reality TV show pitting contestants against each other to design and create fashions within restricted parameters of time, materials and theme. Their designs are judged, and each week, at least one designer is eliminated.

The three finalists of the current third season – Seth Aaron Henderson, Korto Momolu, and Elena Slivnyak – had five days to create a six-piece collection based on their national backgrounds of Spain, Liberia and Ukraine, respectively.

Judging alongside designers Isaac Mizrahi and Georgina Chapman, Ms. Milano said the outfits needed to be flattering and wearable, but also to capture the essence of the country. “It should give you a certain feeling as you watch it go down the runway.”

The judges researched the regions, and also considered the personal stories each designer told. Each of the finalists also had tête-à-têtes with UN delegates from their countries.

“I just drew a natural collection. It just flowed. It was so inspiring coming here,” Mr. Henderson, whose line was influenced by Spanish qualities, told UNTV producer Alexandra King during the finale filming in July 2013. “It was not difficult for me to conceptualize what I was going to do.”

Ms. Momolu, originally from Liberia where her father worked in politics, said being at the UN was like coming home: “Being able to come here with different countries, we’re all so different, but this one thing brings us together, unites us.”

The third finalist, Ms. Slivnyak, grew up in Kiev, Ukraine, and has said her future targets for designing are in Europe, as well as China and Japan.

The finalists showed their lines in the Economic and Social Council Chamber, which is typically crowded with politicians and bureaucrats in traditionally neutral-coloured, straight-cut suits, and where discussions steer towards finding collective solutions to socio-economic and environmental challenges. 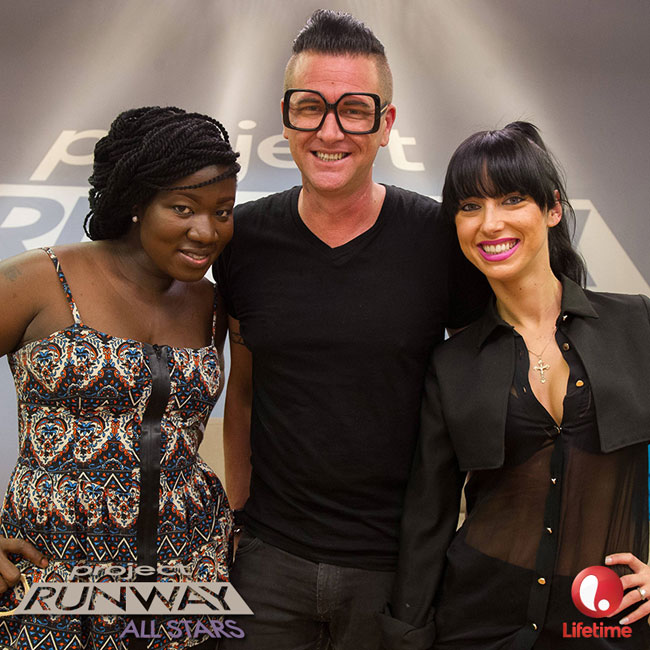 Finalists of 'Project Runway All Stars' Season 3. The season finale, filmed at the UN Headquarters in New York, airs on 9 January on the Lifetime Network. Photo courtesy of Lifetime Network 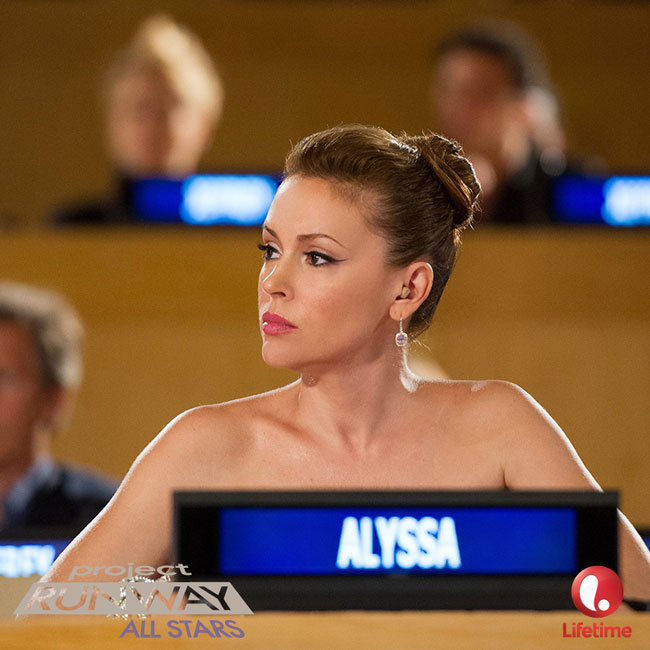 'Project Runway All-Stars' host and judge Alyssa Milano at the filming of the season finale at the UN Headquarters in New York. Photo courtesy of Lifetime Network 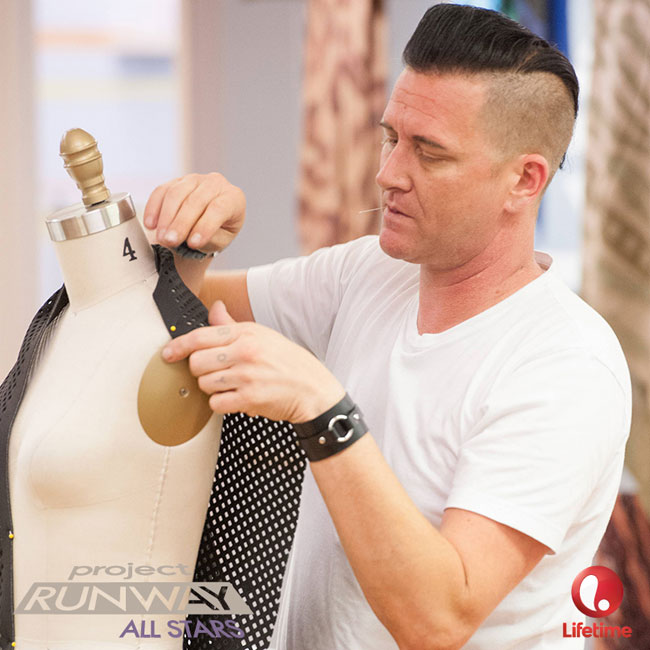 "It was so inspiring coming here," said finalist Seth Aaron Henderson of showing his collection at the UN. Photo courtesy of Lifetime Network 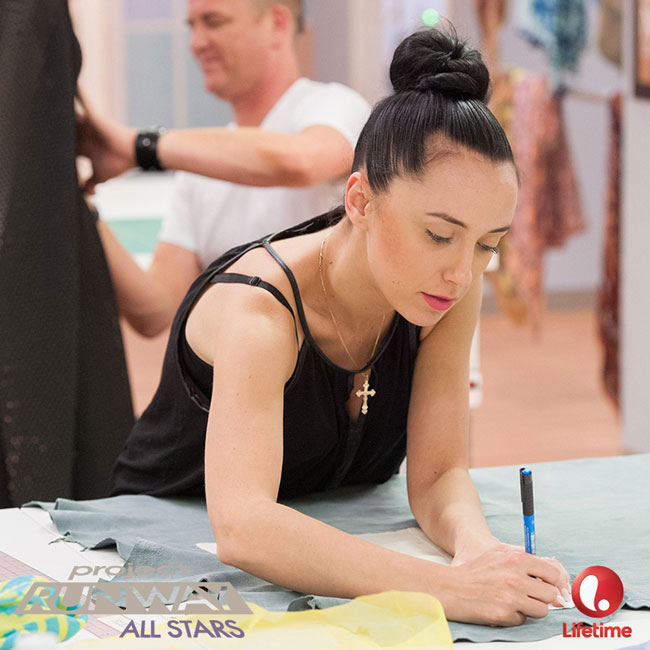 Designer Elena Slivnyak, one of three finalists on 'Project Runway All Stars' filmed at UNHQ: "It's an amazing experience to be here." Photo courtesy of Lifetime Network 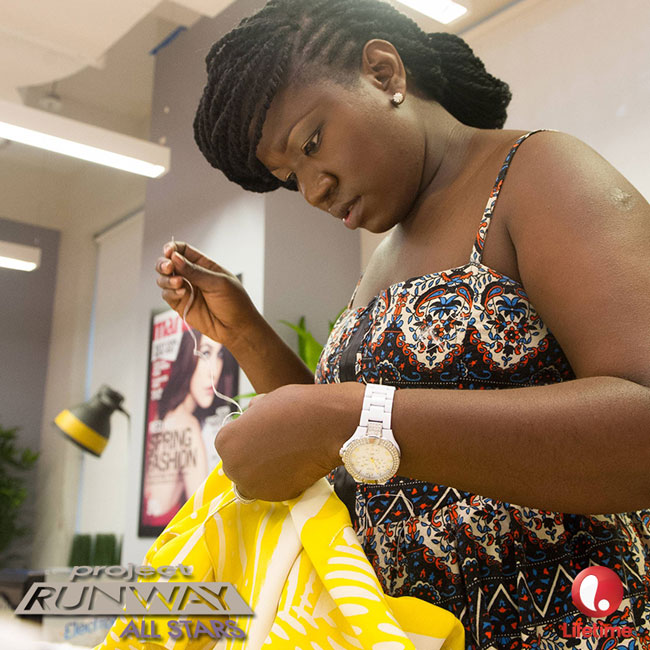 Fashion designer Korto Momolu is one of three finalists in the current season of 'Project Runway All Stars'. Photo courtesy of Lifetime Network

Back in July, on the day of the final shoot, the full house still included delegates and UN staff, but the ratio of national costumes, stilettos and pocket squares rose dramatically, as did conversations about mixing patterns, sustainable accessories and runway eyeliner.

Peter Launsky-Tieffenthal, Under-Secretary-General for the Department of Public Information which oversees the Creative Community Outreach Initiative (CCOI), the office responsible for bringing the Project Runway All-Stars to the UN, sat in on the runway show with guest judges Gayle King and Zac Posen. The VIP access did not give him any insights into the winner, though.

“I’m certainly not a fashionista!”, he joked. “I have no idea who won so I look forward to seeing the final episode.”

He welcomed the opportunity for the UN to host the show, he said, and noted that the designers’ works showcased the traditions and heritage of their different backgrounds.

“Fashion - like music - is a universal language. The joy we take from it helps us to transcend our barriers and overcome our differences. These, of course, are themes that the UN is working with every day,” added Mr. Launsky-Tieffenthal.

The UN has an ongoing partnership with the fashion industry through the Fashion for Development (F4D) initiative. A global platform to advance the eight anti-poverty targets known as the Millennium Development Goals (MDGs), F4D was founded in 1996 with the support of the Paris-based UN Educational, Scientific and Cultural Organization (UNESCO) to assist women in the developing world create new businesses and entrepreneurial opportunities in the fashion industry.

F4D also works to reduce tariffs on threads and fabric, and to raise capital for new factories, train local people and enlist established designers to get involved.

The UN International Labour Organization (ILO) and the Office of the High Commissioner of Human Rights (OHCHR) are among the UN agencies who have been vocal about some of the challenges in the fashion industry.

The deadly collapse of the Rana Plaza garment factory complex in Bangladesh last April led to a greater push on international fashion brands and retailers, and trade unions to prevent workplace disasters in textile production.

Meanwhile, ongoing protests in Cambodia over minimum wages have virtually shut down the garment industry that supports 400,000 jobs and accounts for some $5 billion per year in exports.

“Designers have an obligation not only to select materials but also to know where the materials are coming from, what factories throughout the world they are being constructed in and what the labour is like,” Ms. Milano, who has her own clothing line, said in the telephone interview from Los Angeles.

“There are very few opportunities for young people to really get a good understanding of where their clothing comes from,” she said.

I think we just assume that everything gets put together by some robot, and the fact is that there is a beautiful art form in fashion designing that I think this show exposes to a generation that perhaps might take for granted where their clothing comes from.”

Ms. Milano, who over the past decade travelled on behalf of UNICEF to Angola, India and Kosovo, got involved with the UN after filming in South Africa, when the political and social changes she was witnessing inspired her to start volunteering in a children’s hospital.

“When I came back to the [United] States, I had a very hard time assimilating the humanitarian that I was able to be [overseas] with the person that I had become here, which was the actress that lived in Beverly Hills and drove a BMW, that very stereotypical self-centred person that I didn’t feel I wanted to be anymore,” she said.

Ms. Milano said the humanitarian work she has done since then gave special meaning to the filming of the ‘Project Runway All-Stars’ season finale.

“Sometimes when I think about the work that needs to be done, it’s completely and utterly overwhelming. I think we have so far to come,” she noted. “The work that the UN does, the work that UNICEF does, to me, it represents a great amount of hope for a better tomorrow.”

The season finale airs on 9 January on the Lifetime Network.