8 January 2014
As United Nations-led talks on outlining the future global development agenda continue to progress, UN agency officials joined representatives of mountain countries and organizations today at Headquarters to encourage mountain-specific policies in sustainable development strategies, with a particular focus on plans for adaptation and mitigation of climate change.

In connection with 7th session of the Open Working Group on Sustainable Development Goals, under way in New York since Monday, the UN Mountain Partnership Secretariat held an event on “Building resilience to climate change in mountain areas,” at which participants considered two major policy papers urging action to ensure that goals, targets and indicators are set to improve the livelihoods of mountain people and to conserve mountain ecosystems.

The Open Working Group is tasked with identifying the international development agenda that will succeed the Millennium Development Goals – the anti-poverty targets agreed at a UN summit in 2000 and set to expire next year. The UN has stressed sustainable development – environmental, social and economic well-being for all – as the way forward.

Today’s side-event stressed the vital importance of mountains to ensuring a comprehensive post-2015 agenda, especially as diverse mountain ecosystems provide freshwater to half of the world’s population and are home to half of all global biodiversity hotspots. At the same time, climate change is severely impacting mountain areas and posing threats to the livelihoods of mountain people.

The UN Food and Agriculture Organization (FAO) the United Nations Environment Programme (UNEP) along with the missions of Argentina, Italy, Kyrgyzstan and Peru were co-organizers of the event, which featured a keynote speech by Ivan Ramirez, Assistant Professor of Environmental Health and the New York-based New School.

According to the UN, many scientists believe that mountains can act as early warning systems, as the changes occurring in mountain ecosystems may provide an early glimpse of what could come to pass in lowland environments. The keynote address echoed that belief, which was also highlighted in the policy papers, respectively on “Mountains and the Sustainable Development Goals” and “Why Mountains Matter for Climate Change Adaptation and Disaster Risk Reduction.”

The paper on disaster risk reduction notes specifically that mountain communities have a wealth of knowledge and strategies, accumulated over generations, pm how to cope with harsh environment and adapt to climate variability.

“Mountain communities should not be viewed simply as vulnerable, the also have rich experiences and indigenous solutions,” says the paper, emphasizing that traditional knowledge should be coupled with advances in technology, including early warning systems for hydro-meteorological disasters. It stresses that when mountain ecosystems are managed sustainably, they can continue to provide regulating services that act as buffers against climate change and natural disasters, for example, preventing soil erosion and maintaining mountain meadows can protect people in downstream areas from landslides and flash floods.

With a nod to multiculturalism, UN hosts ‘Project Runway’ finale 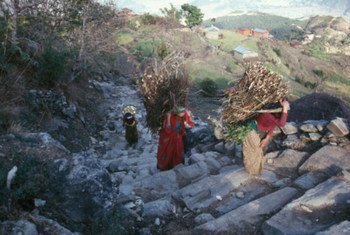 11 December 2013
With mountains providing freshwater to half the world's population mainly thanks to the water and soil management practiced by millions of mountain farmers, the United Nations today called for increased resources and secure land tenure for this crucial sector.