Secretary-General Ban Ki-moon is sending invitations today to the list of invitees determined at the 20 December Trilateral meeting between Russia, the United States and the Joint Special Representative of the UN and the League of Arab States for Syria, Lakhdar Brahimi.

The conference, to be held in Switzerland, will also include the three other permanent members of the Security Council - China, France and the United Kingdom, joining Russia and the US - as well as representatives of the League of Arab States, the European Union, the Organization of Islamic Cooperation, and 26 other countries, Mr. Brahimi announced last month.

“The Secretary-General is in favour of inviting Iran, but discussions between the initiating States have not produced final results yet,” Mr. Ban’s spokesperson today said.

US Secretary of State John Kerry and Russian Foreign Minister Sergei Lavrov are to meet on 13 January, and “we very much hope they will reach agreement on Iran’s participation,” said Mr. Ban, adding that the active support of regional powers is “critical”.

The goal of the conference is to achieve a political solution to the conflict through a comprehensive agreement between the Syrian Government and the opposition for the full implementation of the Geneva communiqué, adopted after the first international meeting on the issue on 30 June 2012, which called for the creation of a transitional government that would lead to the holding of elections.

Mr. Ban said in a statement today that the conference is a “unique opportunity” for ending the violence and ensuring that peace can be restored in a way that fully meets Syrians’ aspirations. Over 100,000 people have been killed and 8 million driven from their homes, 2 million of them seeking refuge in neighbouring countries, since the conflict first erupted in March 2011.

The Secretary-General will chair the event, which will be held in two parts. Following its opening session in Montreux on 22 January, it will then move on 24 January to the Palais des Nations in Geneva where Mr. Brahimi will facilitate the talks between the two Syrian parties.

Given that the opposition groups seeking to oust President Bashar Al-Assad have yet to name who will attend on their behalf, the spokesperson today reiterated the UN’s call for a “broadly representative” delegation as soon as possible, so as to allow sufficient time to prepare for negotiations.

Meanwhile, a separate conference for Syrian women is being organized by UN Women on 12 and 13 January, also in Geneva, to include their opinions in the future of the country, the UN agency has said. 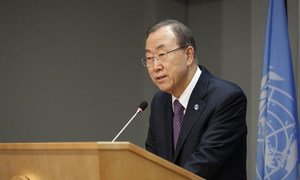