UNHCR/S. Baldwin
A group of Syrian refugee women move into their new home, a former chicken farm, near Qoubaiyat, Lebanon.

6 January 2014
The top United Nations official in Lebanon met today with senior leaders from the Government of Saudi Arabia to discuss a host of issues, including support for the Lebanese Armed Forces and the region-wide efforts to cope with the massive numbers of refugees sparked by the crisis in Syria.

According to a UN spokesperson, the Secretary-General's Special Coordinator for Lebanon, Derek Plumbly, visited Saudi Arabia today and met with senior Saudi officials, including the Second Deputy Prime Minister and the Vice Minister of Foreign Affairs.

He discussed the support agenda for Lebanon and the region ahead of the conference on Syrian refugees, which is to be held in Kuwait on 15 January.

The Spokesperson said that following the discussions, Mr. Plumbly noted the crucial importance of the Lebanese Armed Forces for security and stability in Lebanon and the calls by the Security Council, the Secretary-General and the International Support Group for assistance in support of those Forces.

He said that Mr. Plumbly warmly welcomed the very generous pledge of assistance from Saudi Arabia in that regard recently announced by Lebanese President Michel Sleiman.

On 2 January, Mr. Plumbly joined other UN officials in calling on all parties in Lebanon to show restraint following the second deadly car bomb attack in less than a week, and to support the army and security forces as they seek to prevent further acts of terrorism.

“This act follows the terrible bombing on 27 December and further reflects a deeply worrying escalation in the violence witnessed in Lebanon in recent months,” Secretary-General Ban Ki-moon said in a statement issued by his spokesperson.

The Security Council issued a press statement reaffirming that “terrorism in all its forms and manifestations constitutes one of the most serious threats to international peace and security, and that any acts of terrorism are criminal and unjustifiable, regardless of their motivation, wherever, whenever and by whomsoever committed.”

Several people were killed or injured when the car bomb ripped through the southern Beirut suburb of Haret Hreik. Last Friday, a car bomb in the centre of the capital killed former minister Mohammad Chattah and at least five others, an attack that Mr. Ban and the Council said underlined the need to protect Lebanon’s stability in the face of such terrorism and the civil war in neighbouring Syria.

At that time, Mr. Plumbly voiced outrage that this was the fourth bomb to explode in Beirut’s southern suburbs since July and stressed the importance of bringing to justice those responsible for this and all other such acts of terrorism. 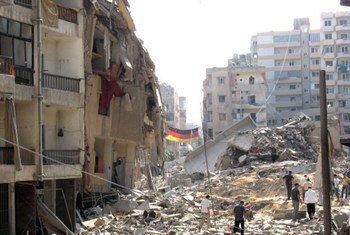 2 January 2014
The United Nations today called on all parties in Lebanon to show restraint following the second deadly car bomb attack in less than a week, and to support the army and security forces as they seek to prevent further acts of terrorism.