In statement issued by the UN Human Rights Office (OHCHR), Surya P. Subedi, the Special Rapporteur on the situation of human rights in Cambodia, reiterated his appeal for calm after the incident, which is the third time since the disputed July 2013 general election that the authorities have shot into a crowd and caused fatalities.

“I am deeply concerned at the latest clashes in Cambodia and deplore the loss of life. I call on the authorities to exercise restraint towards protestors. Any use of force by officials must be subject to the principles of legality, necessity and proportionality,” Mr. Subedi said.

“There must be a swift and independent investigation into whether excessive force was used on this occasion and the previous two occasions,” he added.

Mr. Subedi also expressed concern that some demonstrators were increasingly resorting to violence and had been throwing stones and damaging property He called on them, “regardless of the reason for their protest, to exercise maximum restraint.”

The Special Rapporteur again called for meaningful negotiations over the demands by garment workers, who began protesting several weeks ago for an increase in the minimum wage.

According to OHCHR, the strikes by garment workers pressing for higher wages have added fuel to the political demonstrations organized since July by the opposition party to demand the resignation of Prime Minister Hun Sen and a re-run of the election.

“Cambodia is now seeing daily demonstrations. It is to be welcomed that Cambodians now feel able to exercise their right to protest but protests must be peaceful,” Mr Subedi said.

Just over a week ago, the Special Rapporteur called for “meaningful talks to resolve the current dispute” based on concrete data that reflect the real cost of a dignified life respectful of human rights.

“All parties – the Government, striking workers, trade unions, the factories and buyers – needed to reassure protesting workers that they would develop a realistic wage structure,” he said in a news release. As for the political dispute that sent the protestors originally to the street, Mr. Subedi urged both sides to return to the negotiation table. 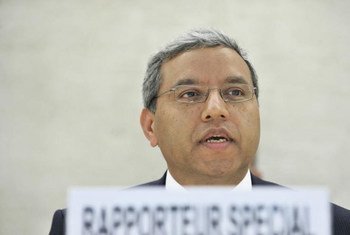 27 December 2013
An independent United Nations human rights expert today urged Cambodian authorities to continue to exercise restraint amid daily demonstrations in the capital of Phnom Penh, while also praising the increasing democratic space allowing people to comfortably express themselves in the streets without fear of retaliation and warning them against resorting to violence.