Amid set peace talks between the Government of South Sudan and warring rebels, the head of the United Nations peacekeeping mission in the country today urged both sides to make crucial efforts to end the violence.

“We call for both parties to use this first day of the new year to take a decisive step for peace,” the Special Representative of the Secretary-General, Hilde Johnson, told journalists in the South Sudanese capital, Juba. “We want to make this day, the day that the fighting stopped.”

Representatives of President Salva Kiir and former deputy president Riek Machar are due to meet in the Ethiopian capital of Addis Ababa, according to the Intergovernmental Authority on Development (IGAD), the East African bloc that is mediating the talks.

Ms. Johnson said that she had spoken by phone with Ethiopian Foreign Minister Tedros Adhanom Ghebreyesu, who confirmed that the delegations were expected to arrive “this afternoon”.

Cessation of hostilities, opening humanitarian corridors, the issue of political prisoners, and protection of civilians will form the main agenda of the talks.

“It is a step in the right direction,” said Ms. Johnson, who also heads the UN Mission in South Sudan (UNMISS).

She added that negotiations in Addis need to be accompanied by a deeper process that focuses on national reconciliation, and reconciliation between the communities which have not healed since South Sudan won independence from Sudan in 2011 after decades of civil war.

“The country is at a crossroads. It's at the fork in the road,” Ms. Johnson said. “But it can still be saved from further major escalations of violence. It is up to the leaders of this country and the two parties.”

Fresh fighting in the world's newest country erupted on 15 December when President Kiir said soldiers loyal to Mr. Machar, dismissed from office in July, launched an attempted coup. Mr. Kiir belongs to the Dinka ethnic group and Mr. Machar to the Lou Nuer, and the conflict has been increasingly marked by reports of ethnically targeted violence.

Thousands of people are estimated to have died in the violence and some 180,000 others have been driven from their homes, up to 75,000 of them seeking refuge on UNMISS bases, which has been authorized by the Security Council to almost double its armed strength to nearly 14,000 in an effort to protect civilians.

“We need to do everything to prevent such a cycle of violence between the communities in South Sudan,” Ms. Johnson said, stressing that those responsible need to be held to account.

“I condemn in the strongest possible terms the atrocities committed against innocent civilians of different communities by elements from both sides,” she added.

UNMISS cited the discovery of large numbers of bodies in Juba, the capital, and the Upper Nile and Jonglei state capitals of Malakal and Bor.

The UN has been collecting information every day since the crisis began and pledged to continue to investigate all reports of serious human rights violations, and to collect evidence and eyewitness testimony in order to document such allegations.

It reminded all parties of their obligation to protect civilians and act in accordance with human rights and humanitarian law, and called on key leaders to send strong public messages to their respective constituencies insisting that the violence must stop, and that anyone disobeying these orders will be punished severely.

Ms. Johnson welcomed the African Union's Peace and Security Council's decision to establish a commission to investigate human rights violations and other abuses and recommend ways and means to ensure accountability, reconciliation and healing among all communities.

Aid agencies will need $166 million to respond to immediate needs until March, Ms. Johnson reminded the international community calling on donors to come forward and assist. 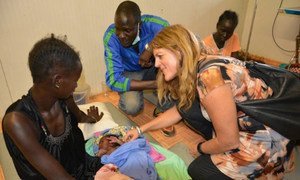