SCSL
The Special Court for Sierra Leone in Freetown.

31 December 2013
Secretary-General Ban Ki-moon has congratulated the staff of the United Nations-backed Special Court for Sierra Leone (SCSL), which closes today, on their important achievements over the past 11 years in ensuring accountability for crimes committed during the country’s decade-long civil war.

The SCSL, an independent tribunal set up jointly by the Government of Sierra Leone and the UN, is mandated to try those who bear the greatest responsibility for serious violations of international humanitarian law and Sierra Leonean law committed in the country since 1996.

Based in the capital city of Freetown, the Special Court carried out numerous trials since its establishment in 2002, including those of various leaders in the country as well as of former Liberian President Charles Taylor. The trials saw first-ever convictions for attacks against UN peacekeepers, forced marriage as a crime against humanity, and for the use of child soldiers.

“The United Nations is proud of its partnership with the Government of Sierra Leone in establishing the Special Court, which ensured accountability for the unspeakable crimes committed during Sierra Leone’s over a decade-long civil war, and thereby greatly contributed towards establishing peace and stability and in laying the ground for Sierra Leone’s long-term development,” said a statement issued by the spokesperson for the Secretary-General.

“Of the impressive legacy and the many lessons that the work of the Special Court leaves behind as we move forward in truly establishing an age of accountability, one lesson stands out above all: justice is an indispensable element for peace to be sustainable in post-conflict societies,” it added.

The SCSL will be succeeded on 1 January 2014 by the Residual Special Court for Sierra Leone, which will deal with matters arising from the ongoing legal obligations of the tribunal which could include the review of applications by convicts for early release or the judicial review of their convictions. Judges may also be called on to preside over any contempt of court proceedings.

At a formal ceremony held in Freetown earlier this month, Under-Secretary-General for Legal Affairs and UN Legal Counsel Miguel de Serpa Soares hailed the closing of the SCSL as “a landmark, not only for the Special Court, but also for international criminal justice in general.”

He said that the Special Court’s legacy would benefit both national courts in the region and around the world in dealing with vital issues, and paid tribute to the witnesses who stepped forward and allowed the Court “to inscribe their experiences in the history of this country.”

“In the most fundamental sense, this Court is their court,” he said. “Its success validates their accounting of the most horrendous crimes known to humanity. I salute their courage and their conviction in speaking out, in order that justice could be done.” 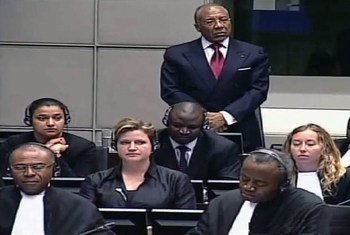 26 September 2013
The Prosecutor of the United Nations-backed Special Court for Sierra Leone (SCSL) today welcomed the court’s decision to uphold the conviction of former Liberian President Charles Taylor for war crimes and crimes against humanity.