UNMISS/Anna Adhikari
Some 39 peacekeepers from the UNMISS Mongolian Battalion based in Rumbek, South Sudan, arrived in Bentiu on 30 December 2013 to reinforce UN presence in Unity state.
30 December 2013

The United Nations moved on the diplomatic and military fronts today to douse the flames of conflict in South Sudan, with Secretary-General Ban Ki-moon urging the Government to free political prisoners to facilitate talks with rebels and the Security Council holding a crisis meeting on latest efforts to reinforce UN peacekeepers in the world’s newest country.

“[It] is very, very dire situation,” Council President, Gérard Araud of France, told reporters after the meeting, in which Mr. Ban’s Special Representative, Hilde Johnson, briefed the 15-member body by video link from Juba, South Sudan’s capital, on the latest developments in the fighting, the mediation efforts of neighbours to stop, and the steps by humanitarian agencies to bring aid to those in need.

The fighting in South Sudan, which only gained independence in 2011 after seceding from Sudan, erupted on 15 December when President Salva Kiir said soldiers loyal to former deputy president Riek Machar, dismissed in July, launched an attempted coup. Mr. Kiir belongs to the Dinka ethnic group and Mr. Machar to the Lou Nuer, and the conflict has been increasingly marked by reports of ethnically targeted violence.

Thousands of people are estimated to have died in the violence and some 180,000 others have been driven from their homes, up to 75,000 of them seeking refuge on the bases of the UN peacekeeping Mission in South Sudan (UNMISS), which has been authorized by the Council to almost double its armed strength to nearly 14,000 in an effort to protect civilians.

“It’s a situation that is really tragic,” Mr. Araud said. “It’s impossible to assess the number of casualties, but it’s really pretty high.”

UN Under-Secretary-General for Peacekeeping Operations Hervé Ladsous said it is hoped that all peacekeeping reinforcements will be on the ground within one to three weeks. The first two police units have already arrived.

Mr. Ban spoke by phone with Mr. Kiir this morning, welcoming his declared commitment to cease hostilities and readiness to engage opposition leaders in dialogue and encouraging him to consider the early release of political prisoners.

He reiterated full UN support for mediation efforts by the East African regional bloc known as the Intergovernmental Authority on Development (IGAD) and called for full cooperation by all parties in finding a peaceful solution. He also stressed the need to hold accountable those responsible for attacks on civilians.

Mr. Ladsous, who also briefed the Council, told reporters much progress had been made on finding reinforcements for UNMISS, including both troops and equipment such as helicopters. “We have been working round the clock to secure the contributions, the contingents and the equipment,” he said.

A lot of the reinforcements are being seconded from other UN peacekeeping missions in Darfur, Liberia, Haiti and Côte d’Ivoire, but these missions cannot supply all the necessary equipment such as a level-two field hospital and tactical helicopters.

“UNMISS suffers from a lack of rotary wing air assets. This is why it is a high priority that we can bring in more both utility and tactical helicopters,” Mr. Ladsous said, noting the mission’s surveillance and monitoring role over the vast territory, where it has detected armed groups moving north-east of Bor.

Mr. Araud, the Permanent Representative of France which holds this month’s rotating Council presidency, said Mr. Ban wrote to the Council asking for attack helicopters. In authorizing the increase in UNMISS last week, the Council stressed its priority role in protecting civilians.

There is still a lot of fighting going on around Bor, capital of Jonglei state, where 20,000 civilians have sought shelter on UN bases, and within the city of Malakal, where 22,000 others have fled to UN bases there, Mr. Araud said. In Bentiu, in the country’s oil-producing north, where oil production has ceased, Government forces are positioned to take the city.

The human rights situation is “also pretty worrying. There are reports of torturing, killing, disappearance and of ethnically targeted violence,” Mr. Araud noted, adding that the UNMISS human rights component has been upgraded so that there will be accountability for rights violations.

On political front, the Council expressed support for IGAD’s mediation efforts which are being carried out by Ethiopia and Kenya.

Asked about an apparent increase in fighting even as IGAD tries to secure a peaceful solution, Mr. Araud said: “The general impression is, unfortunately, that for the moment, the two sides are determined, on the Government side to restore as much as it can of its authority.

Mr. Ladsous said there could be no conditions on which nationalities supplied the UNMISS reinforcement. “One thing I would like to highlight is that we would expect total cooperation from the Government of South Sudan, that is to say we will not be pleased at all if there were to be, as there seem to have been, some caveats on the choice of certain nationalities,” he said.

“When the house is on fire you do not care about the nationality or whatever else of the firemen. You just need the fire persons to be able to operate.”

On the humanitarian front, aid agencies have reached an estimated 106,000 displaced people so far with food, water, sanitation and health care, both inside and outside UN peacekeeping bases. They have delivered high-energy biscuits to children and are working on establishing malnutrition screening and treatment centres in Juba.

Thousands of children under 15-years of age will receive measles and polio vaccines at the peacekeeping base in Tomping, Juba.

Aid organizations have appealed for a total of $209 million to provide immediate assistance to families over the next three months. They have received only $43 million so far. 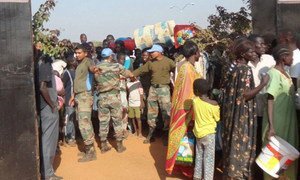 Secretary-General Ban Ki-moon on Saturday welcomed the appointment of a mediation team to work with Government of South Sudan and the opposition towards reaching a ceasefire to end the current conflict, which has taken a heavy toll on the world's youngest nation.