UN Photo/Sylvain Liechti
Peacekeepers serving with the UN Organization Stabilization Mission in the Democratic Republic of the Congo (MONUSCO) on patrol.
30 December 2013

United Nations peacekeepers in the Democratic Republic of the Congo (DRC) are on alert today amid ongoing clashes between Government forces and unidentified armed men, according to a spokesperson.

The UN Mission in the country, known by its French acronym MONUSCO, reported that national authorities engaged the fighters and were able to restore calm in Lubumbashi, a major city in the southeast, and Kindu, in the east, UN spokesperson Martin Nesirky told journalists in New York.

“The identity and motivation of the assailants remains unclear at this stage,” Mr. Nesirky stressed.

He added that a national staff member at MONUSCO was injured in the shooting at the airport but is in stable condition.

There are also reports of fighting in the capital, Kinshasa, which media reports have linked the violence to a failed coup attempt.

In recent days, UN peacekeepers in the eastern part of the country helped national armed forces retake control of a town following an attack by a Ugandan rebel group that left dozens dead and displaced many more.

In the early hours of Wednesday, the Allied Democratic Forces-National Army for the Liberation of Uganda (ADF-Nalu) attacked positions of the Congolese national armed forces (FARDC) in the town of Kamango burning homes and abducting dozens of people.

In accordance with its mandate to protect civilians, MONUSCO supported the FARDC during the operation against the rebel group, including through the use of its attack helicopter, the provision of logistical support and medical evacuations.

In March, the Security Council authorized the deployment of an intervention brigade within MONUSCO to carry out targeted offensive operations, with or without the Congolese national army, against armed groups that threaten peace in eastern DRC. 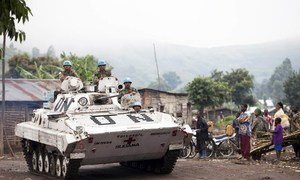 United Nations peacekeepers in eastern Democratic Republic of the Congo (DRC) yesterday helped the national armed forces retake control over a town following an attack by a Ugandan rebel group that left dozens dead and displaced many more.