30 December 2013
Attacks against children in the Central African Republic (CAR) have sunk to a “vicious new low,” the United Nations children’s agency warned today, saying that at least two children have been beheaded, and one of them mutilated, in the violence that has gripped the capital since early December.

“We are witnessing unprecedented levels of violence against children. More and more children are being recruited into armed groups, and they are also being directly targeted in atrocious revenge attacks,” said Souleymane Diabate, Country Representative for the UN Children’s Fund (UNICEF).

“Targeted attacks against children are a violation of international humanitarian and human rights law and must stop immediately. Concrete action is needed now to prevent violence against children,” Mr. Diabate added in a news release.

UNICEF and partners have verified the killings of at least 16 children, and injuries among 60, since the outbreak of communal violence in the capital, Bangui, on 5 December.

CAR has been thrown into turmoil since Séléka rebels launched attacks a year ago and forced President François Bozizé to flee in March. A transitional government has since been entrusted with restoring peace and paving the way for democratic elections, but armed clashes have erupted again, and in Bangui last week, Christians and Muslims launched reprisal attacks against each other in and around the city.

UN agencies have reported that the humanitarian situation in the country is deteriorating, with at least 600 people killed this month alone, and over 100,000 others driven from their homes in Bangui.

Mr. Diabate said that armed elements were accountable for taking specific measures to protect children, including clear directives by those in positions of authority within armed forces and groups to halt grave violations against children.

“The orders must make clear that children must not be recruited into the fighting, nor targeted,” stated UNICEF, which also called for the immediate release of children associated with armed forces and groups, and their protection from reprisals.

The agency also cited the need to prohibit attacks against health and education personnel, and the use of civilian spaces such as schools and hospitals for military purposes. Allowing safe, unhindered passage of impartial humanitarian assistance was critical, it added.

UNICEF is scaling up relief efforts among displaced communities, including the provision of safe water, sanitation facilities and medical supplies, and setting up safe spaces for children. 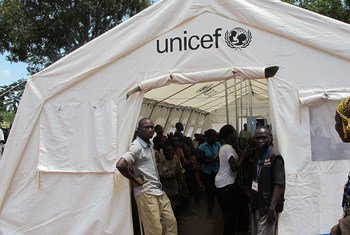 26 December 2013
The United Nations has voiced “extreme concern” that recent violence in the Central African Republic (CAR) will cause a sharp increase in children suffering severe malnutrition, putting an already vulnerable population at further risk.