30 December 2013
Members of the United Nations Security Council said they are “outraged” by today’s terrorist attack targeting a bus in Volgograd, Russia, that caused numerous deaths and injuries – the second suicide bombing in the city within a 24-hour period.

The 15 members of the Council, in a statement issued to the press, condemned the bus attack “in the strongest terms” and extended their condolences to the families of the victims.

Media reports say at least 14 people were killed in today’s bombing, which comes on the heels of yesterday’s attack at the central train station in Volgograd that reportedly killed 16 people and wounded 40 others.

Yesterday’s attack was also condemned by the Council as well as UN Secretary-General Ban Ki-moon, who called for the perpetrators to be brought to justice.

“These abhorrent and abominable attacks deliberately targeted places of mass gathering, in particular public transportation,” said the Council, which reaffirmed that any acts of terrorism are criminal and unjustifiable, regardless of their motivation, wherever, whenever and by whomsoever committed.

“The members of the Security Council underlined the need to bring perpetrators, organizers, financiers and sponsors of this reprehensible act of terrorism to justice, and urged all States, in accordance with their obligations under international law and relevant Security Council resolutions, to cooperate actively with all relevant authorities in this regard.”

Later in the day, UN Secretary-General Ban Ki-moon spoke by telephone with President Vladimir Putin and expressed his deepest condolences to the families of the victims of the attacks in Volgograd, as well as to the Russian people.

“The Secretary-General stressed the importance of strong international cooperation to fight terrorism and he noted that the perpetrators must be brought to justice,” said a statement issued by Mr. Ban’s spokesperson in New York.

Further to the statement, President Putin expressed his gratitude to the Secretary-General for his personal condolences, which were greatly appreciated by the Russian people.

Mr. Putin noted that the international community must work together in the fight against terrorism and commended the UN for its important role in coordinating efforts to fight organized crime and terrorism. He assured Mr. Ban the Russia would work within the bounds of international law to bring the perpetrators to justice.

“The Secretary-General and President Putin also discussed various developments related to Syria,” said the statement, which added that President Putin confirmed Russia's strong support for the international conference on Syria, to take place in Switzerland in January, and for the second humanitarian pledging conference for Syria, to be held in Kuwait on 15 January. 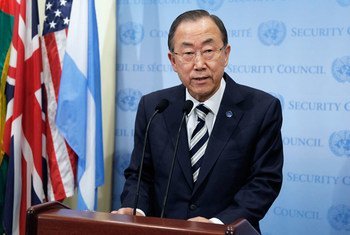 29 December 2013
Secretary-General Ban Ki-moon and the Security Council strongly condemned the terrorist attack that occurred at the central train station of the Russian city of Volgograd today causing numerous deaths and injuries.