Secretary-General Ban Ki-moon today announced the appointment of Philippe Lazzarini as his Deputy Special Representative, as well as Resident and Humanitarian Coordinator, in Somalia.

Secretary-General Ban Ki-moon today announced the appointment of Philippe Lazzarini as his Deputy Special Representative, as well as Resident and Humanitarian Coordinator, in Somalia.

Mr. Lazzarini, a citizen of Switzerland, will serve as Deputy to Special Representative of the Secretary-General, Nicholas Kay, who heads the United Nations Assistance Mission in Somalia (UNSOM).

The Security Council established the Mission in May to more effectively coordinate international support for Somalia’s Federal Government.

Mr. Lazzarini, who has been the Resident and Humanitarian Coordinator and UNDP Resident Representative in Somalia since March 2013, will also continue to bring together the different UN agencies operating in Somalia to improve their efficiency and effectiveness at providing humanitarian and development support to the Government.

Prior to this assignment, he held a number of senior positions in the Office for the Coordination of Humanitarian Affairs (OCHA), including as Deputy Director of the Coordination and Response Division (2011 to 2013), and in various field positions in Iraq, Angola, Somalia, and the occupied Palestinian territory.

Before joining the UN, Mr. Lazzarini served as a delegate for the International Committee of the Red Cross (ICRC) in southern Sudan, Beirut, Amman and Gaza. He also led ICRC operations in Bosnia, Angola and Rwanda. 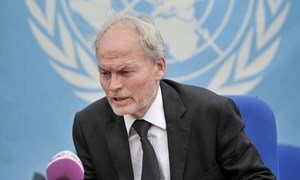 The top United Nations official in Somalia has renewed his call for a timely and credible political process that should lead to a new Puntland parliament this year and regional presidential elections next month.