The General Assembly today wrapped up its work for the main part of the 68th session by approving a budget of $5.5 billion for the United Nations to carry out its vital work over the next two years.

The 193-member body approved the budget for the biennium 2014-2015 by consensus, acting on the recommendation of its committee dealing with administrative and budgetary matters, known as the Fifth Committee, which concluded its work earlier today.

“The new budget is lower than the one for the previous biennium, reflecting our shared wish for a fiscally responsible Secretariat,” Secretary-General Ban Ki-moon said in a message delivered to the Assembly meeting by his Chef de Cabinet, Susana Malcorra, following the decision.

“We will continue to adapt and equip the United Nations to better implement its mandates,” he said, adding that he has urged all managers to rethink their business practices, reduce overlap, embrace innovation, encourage creativity and build synergies.

At the same time, he voiced disappointment that the Assembly failed to reach agreement on two “critically important reform proposals,” namely a managed mobility policy and strengthened arrangements for partnerships with the private sector. The Assembly decided to defer consideration of these two proposals to next spring.

Mr. Ban also stated that it would be unrealistic to presume that any substantial budget reduction will have no impact while mandates keep growing.

“The time may have come for you to consider reviewing mandated activities that may have been fulfilled or overtaken by new developments,” he stated.

In his closing remarks, Assembly President John Ashe noted that today’s conclusion of the Fifth Committee – which normally wraps up its work just prior to Christmas – again underscored the need to adapt, indeed revitalize, the Assembly’s working methods.

“As the work of our Organization gets more challenging, so does its financial and administrative needs. We therefore need to ensure that the ways in which we deal with these challenges have evolved and that the approaches of yesteryear also need to evolve if we are to have a fully functional Organization,” he told Member States.

Noting the need for adequate time to consider all aspects of what is now “a fairly detailed and intricate UN budget,” he said that perhaps the time has come to look at either a dedicated session of the Fifth Committee for this process or to have the introduction of the budget at the outset of the Committee’s work rather than in late October as is the current practice.

Discussing some of the achievements of the session, Mr. Ashe reported that the Assembly adopted 259 resolutions and took 66 decisions, covering a wide range of issues, from nuclear disarmament to the rule of law at national and international levels, and from financing for development to the peaceful use of outer space.

The session also saw new resolutions introduced on the right to privacy and the safety of journalists, as well as a resolution designed to strengthen the UN Economic and Social Council (ECOSOC).

Ban welcomes approval of UN budget for next two years 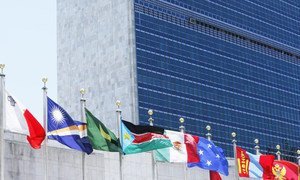