27 December 2013
Some 63,000 civilians have now sought refuge in United Nations bases in South Sudan as the UN peacekeeping mission there moves to reinforce its strength with troops and helicopters in the face of a conflict that has killed thousands and driven at least 122,000 others from their homes in the past 12 days.

“Priorities for the response to the displaced are food, healthcare, shelter, water, sanitation and hygiene services, protection and camp management,” the UN Mission in South Sudan (UNMISS) reported today, noting that aid agencies will need $166 million to respond to immediate needs until March. “Additional air assets and transport support are needed to enable the response.”

UNMISS said heavy fighting raged between Government and rebel forces in Jonglei and Upper Nile states over the past three days. On Tuesday the Government said it had regained control of Bor, in Jonglei state. “Since then, there has reportedly been no fighting in the town itself, though clashes continue in the surrounding areas,” UNMISS reported.

Tensions within South Sudan, the world’s youngest country which only gained independence in 2011 after seceding from Sudan, burst out into open conflict on 15 December when President Salva Kiir's Government said soldiers loyal to former deputy president Riek Machar, dismissed in July, launched an attempted coup. Mr. Kiir belongs to the Dinka ethnic group and Mr. Machar to the Lou Nuer. The conflict has been increasingly marked by reports of ethnically targeted violence.

The UN Department of Peacekeeping Operations (DPKO) is working with other peacekeeping missions in the region, as well as troop and police contributing countries, to quickly move troops and equipment, especially helicopters, into South Sudan to strengthen the protection of civilians. Yesterday Secretary-General Ban Ki-moon’s Special Representative in South Sudan, Hilde Johnson, said she hoped to have the first reinforcements on the ground within 48 hours.

On Tuesday the Security Council authorized almost doubling UNMISS peacekeepers to nearly 14,000 personnel through the transfer of units if necessary from UN forces in the Democratic Republic of the Congo (DRC), Darfur, Abyei, Côte d’Ivoire and Liberia, and 72 police from the peacekeeping force in DRC (MONUSCO) arrived in Juba today.

The officers, from Bangladesh, are trained in crowd management and security and will be deployed immediately to help with the growing numbers of displaced in the UN Compounds.

Though the number of people killed in the clashes is unknown, thousands are likely to have lost their lives since the crisis started, UNMISS said.

The UN Office for the Coordination of Humanitarian Affairs (OCHA) reported that that at least 121,600 people have been displaced and humanitarian organizations say the figure is expected to be higher.

“A top priority for humanitarian agencies is to re-enter areas currently inaccessible due to insecurity, and gather more information about needs of people displaced outside main population centres,” UNMISS said.

OCHA said aid agencies have delivered food to thousands of people in Juba, Bentiu, Malakal and Awerial, but have not been able to access the relief warehouse in Bor due to insecurity, and reports indicate that it may have been looted.

Mobile clinics operating in UN facilities in Juba, where 25,000 civilians have sought refuge, are carrying out 350 consultations per day, and measles and polio vaccination campaigns are scheduled to begin before the New Year. Aid organisations have distributed mosquito nets, mattresses, tents and soap to displaced families and have set up 160 latrines at displacement sites in Juba.

The main concern remains sanitation as well as hygiene and the risk of disease outbreaks, such as cholera. “All actors are fully focused on minimizing this risk, by improving the public health situation,” UNMISS said.

In Bor, where 15,000 civilians have sought shelter, conditions are “very challenging, especially in terms of health and water and sanitation,” it added. “There are few latrines within the site, and limited access to clean water. There are also urgent needs for food and shelter supplies.”

In Bentiu in Unity state, some 8,000 people are sheltering inside the UN base. “Public health is the main concern, with three cases of measles reported, and top priorities for response are health supplies and blankets to protect people from the cold during night,” the mission reported.

In Upper Nile state, 12,000 people are sheltering in the UN peacekeeping base, and several civilians inside the base were injured by stray bullets during clashes.

Meanwhile, Mr. Ban continues to contact leaders around the world to discuss the crisis. Yesterday President Uhuru Kenyatta of Kenya and Ethiopian Prime Minister Hailemariam Desalegn visited Juba in a bid to broker a peace.

UNMISS is investigating numerous reports of massacres, extra-judicial killings, arbitrary detentions, mistreatment, abuses and mass rapes, and Ms. Johnson has stressed that it is essential that all perpetrators be held accountable. 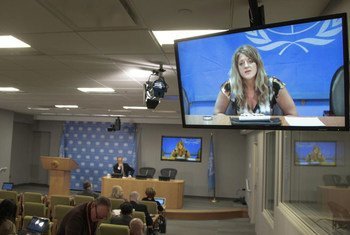 26 December 2013
The United Nations hopes to have peacekeeping reinforcements on the ground in strife-torn South Sudan within the next 48 hours, including both troops and critical assets such as helicopters, as it seeks to protect civilians in a conflict that is already estimated to have claimed well over 1,000 lives, the top UN official in the country said today.