UN Photo/Amanda Voisard
Nickolay Mladenov, Special Representative of the Secretary-General and Head of the UN Mission for Iraq.
27 December 2013

The United Nations today called on the Iraqi Government to ensure maximum security for some 3,200 Iranian exiles in a camp near Baghdad airport after a rocket attack on the airport last night reportedly killed a number of residents and seriously wounded others.

"This is another stark reminder of the increasing violence in Iraq,” Secretary-General Ban Ki-moon’s Special Representative Nickolay Mladenov said, voicing deep concern at the attack, in which rockets fell on Camp Hurriya, which houses the exiles, many of them members of a group known as the People’s Mojahedeen of Iran who have been in Iraq since the 1980s.

“The Government, in cooperation with the Camp Hurriya leadership, needs to take immediate action to ensure that appropriate measures are put in place to maximise the security of the residents,” he added, stressing that responsibility for protecting the camp’s residents falls on the Government under an agreement it signed with the UN in 2011. “This latest incident must be fully investigated by the authorities and those responsible brought to justice."

Both Mr. Mladenov and the UN High Commissioner for Refugees (UNHCR) urged the international community to urgently intensify efforts to find resettlement opportunities. “This is the ultimate guarantee of the security and safety of Camp Hurriya residents," he said.

Strongly condemning the rocket attack, UNHCR appealed to countries to act urgently on 1,400 cases from Camp Hurriya that have already been submitted for relocation. Since 2011, UNHCR, together with the UN Assistance Mission for Iraq (UNAMI), has been trying to find relocation opportunities outside Iraq for all 3,200 residents of the camp, but so far, the international community has secured relocation to third countries of only 311 residents.

The agency said three residents were reportedly killed in the attack and many more wounded, at least four of them seriously and rushed to hospitals by the Iraqi authorities.

Camp Hurriya has already been hit on multiple occasions. Camp New Iraq (formerly Ashraf), where residents were previously staying, was also the target of an attack in the past. UNHCR has consistently deplored such unacceptable attacks.

“UNHCR remains deeply concerned for the safety of the residents of Camp Hurriya and is calling on the Government of Iraq to urgently scale up security measures in the camp to ensure the safety and security of its residents,” the agency said in a statement. “We are also urging the Government to launch a full scale independent investigation into all the incidents.” 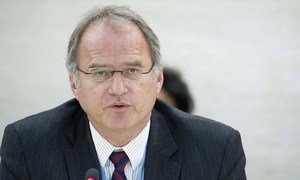 A group of independent United Nations human rights experts today called on the Iraqi Government to clarify the whereabouts of seven residents of Camp Ashraf, who were allegedly abducted last September after an attack that left 52 people dead, guarantee their safety and prevent their extradition to Iran.