Secretary-General Ban Ki-moon, the Security Council and the top United Nations envoy in Lebanon have strongly condemned the car bombing in Beirut today that killed former minister Mohammad Chattah and at least five others, underlining the need to protect the country’s stability in the face of such terrorism and the crisis in neighbouring Syria.

“The Secretary-General is deeply troubled by the recurring acts of terrorism in Lebanon which pose a severe threat to the country’s stability and national cohesion,” Mr. Ban’s spokesperson said in a statement that urged all parties to act with restraint and to support the State and its security forces in preventing further attacks.

“He welcomes the efforts of the Lebanese authorities and security forces to address the security challenges and to protect the country from the impact of the crisis in neighbouring Syria,” the spokesman added.

In their press statement today, the 15 members of the Security Council reiterated their unequivocal condemnation of any attempt to destabilize Lebanon through political assassinations and demanded an immediate end to the use of intimidation and violence against political figures.

They stressed the importance for all Lebanese parties to respect the country’s policy of disassociation and to refrain from any involvement in the Syrian crisis, consistent with their commitment in the Baabda Declaration.

The Declaration, issued during a National Dialogue meeting held at the Baabda Presidential Palace in June 2012, calls for keeping Lebanon neutral in the face of regional tensions and crises.

According to a press release issued today, Derek Plumbly, the UN Special Coordinator for Lebanon, said he was “shocked and deeply saddened” by the bombing.

Mr. Plumbly and the Secretary-General conveyed, as did Council members, their condolences to the families of the victims, and praised Mr. Chattah’s contributions to his country.

As finance minister in the government of Prime Minister Saad Hariri and as foreign policy advisor to Prime Minister Fouad Siniora, Mr. Chattah had served as “a tireless voice for tolerance, diversity and moderation,” Mr. Ban said.

Mr. Plumbly described Mr. Chattah as “a good friend and a wise, courageous and patriotic man, who had consistently sought to promote dialogue and Lebanon’s well-being.”

All of today’s statements stressed the importance of bringing to justice those responsible for what they called an act of terrorism.

Additional political stresses on Lebanon due to the crisis in neighbouring Syria have been recognized by the UN-backed International Support Group for the country, which was inaugurated in New York in September on the margins of the 68th session of the General Assembly.

Meeting in late November, the Group pointed to, in particular, the large influx of refugees from Syria, regretting also the lack of progress on government formation in Beirut. 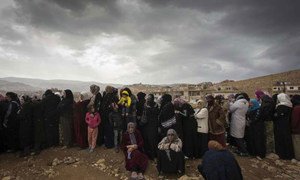