UN Photo/Rolla Hinedi
The remains of two UN peacekeepers from the Indian Battalion, killed in action on 19 December 2013 in Akobo Town, Jonglei State, South Sudan, arriving in Juba for a memorial ceremony.

21 December 2013
The United Nations Mission in South Sudan (UNMISS) held a memorial ceremony in Juba, the capital, today for two Indian battalion peacekeepers who died in the 19 December in a brazen attack on its base in the town of Akobo in restive Jonglei state.

In a statement, Hilde Johnson, Special Representative of the Secretary-General,paid tribute to Warrant Officers Dharmesh Sangwan and Kumar Pal Singh as “brave and courageous soldiers,” and extended her condolences to the families and loved ones of the fallen peacekeepers.

The peacekeepers, along with some 20 civilians, lost their lives when an estimated 2,000 heavily armed youth believed to be of Lour Nuer ethnicity surrounded the outpost and opened fire on the Dinka ethnic civilians, who had been seeking refuge inside. Another Indian peacekeeper was wounded in the incident. After the deadly attack, the assailants fled with arms, ammunition and other supplies.

With the security and humanitarian situations in South Sudan deteriorating as a result of the country's ongoing political disputes, yesterday, UN Secretary-General Ban Ki-moon and the members of the Security Council issued separate statements strongly condemning the ongoing violence, including the attack on the UNMISS base.

Deadly clashes have escalated in South Sudan since last weekend, according to media reports, following what President Salva Kiir's Government claimed was an attempted coup by soldiers loyal to former Vice President Riek Machar, who was dismissed in July.

Ms. Johnson, who also heads UNMISS, noted the Council's press statement, which called on the South Sudanese Government to swiftly investigate the attack and bring the perpetrators to justice.

“As a Mission, we are inspired by the dedication shown by the Indian troops,” said Ms. Johnson, who laid wreaths on the coffins of the slain peacekeepers during the ceremony which was held at the Mission's compound adjacent to Juba International Airport.

“Had it not been for their bravery, the death toll at the (UNMISS base) could have been higher.”

She asked colleagues and other mourners to pray for the speedy recovery of wounded Battalion Warrant Officer Mondal Shabul, who, the Mission reported yesterday, was receiving medical aid for a chest wound at the UNMISS facility in Malakal.

Ms. Johnson also emphasized the resolve of the peacekeeping mission to carry out its mandate to support South Sudan and help protect its people.

“This horrendous act…will not stop us from carrying out our work,” she declared, and added: “To anyone who wants to threaten us, attack us or put obstacles in our way, our message remains loud and clear: we will not be intimidated.”

“The people of South Sudan deeply regret the irresponsible and cowardly act that has led to the loss of life of these great soldiers,” he said. “We extend our deep condolences to the Secretary-General of the United Nations, the Security Council and to the UN family as a whole.”

In April, five UNMISS Indian Battalion peacekeepers died in an ambush in the Jonglei county of Pibor, and the Indian Ambassador to South Sudan Parmod K. Bajaj called on the parties to the current crisis in the country to resolve their differences peacefully through negotiations.

“In South Sudan, seven of our soldiers have laid down their lives during the performance of their duties,” said Ambassador Bajaj. “We are extremely proud and honored by their ultimate sacrifice, (which) will not go in vain.” 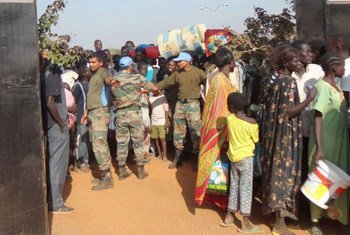 20 December 2013
With the security and humanitarian situations in South Sudan deteriorating as a result of the country's political disputes, Secretary-General Ban Ki-moon and the members of the Security Council have strongly condemned the ongoing violence, including the deadly attack on a United Nations base in Akobo yesterday, which killed some 20 civilians and two peacekeepers.