21 December 2013
Visiting the storm-ravaged Philippine city of Tacloban, Secretary-General Ban Ki-moon hailed the resilience of the people and pledged the commitment of the United Nations to keep working with the Government to “build back better and safer” all the communities devastated by super Typhoon Haiyan, which ripped through the archipelago a little over a month ago.

“I'm deeply saddened and humbled by what I have seen – the immense loss of life and total destruction,” said the UN chief during a press conference after touring the area.

He said that while pleased by the community's warm welcome, his heart was heavy; the tragic suffering of the people and the utter devastation left in the wake of the storm was “hard to describe.”

Tacloban suffered the brunt of Typhoon Haiyan, which swept ashore in the Philippines on 8 November and has been called the strongest such storm to ever touch land. It left nearly 6,000 people dead and displaced millions, affecting close to 14 million people overall.

“As Secretary-General of the United Nations, I'm here to convey my strongest solidarity and that of the United Nations and the international community,” Mr. Ban said, adding that while the people of Tacloban and other communities were dealt a terrible blow, “it can be overcome when we are united. I am here to bring that unity and solidarity to all of your people.”

“My message to the Filipino people is: never despair. The United Nations is behind you. The world is behind you,” declared Mr. Ban.

Noting that the United Nations was among the first to respond in the aftermath of the typhoon, he said the Organization had deployed high-ranking officials and hardworking staff who “have been working day and night with all of their people.”

The Secretary-General appreciated and commended the “very courageous leadership” of Philippines President Benigno Simeon C. Aquino III, his ministers and his team who have been courageously addressing the tragedy.

Meanwhile, Mr. Ban said, the UN will continue to mobilize resources, including nearly $800 million over 12 months, announced last week as part of the Organization's broader humanitarian response strategy for 2014.

“This will be just to complement what your people, your Government, will do. We will try to provide life-saving support – water, sanitation, food, and shelter – and also a long-term development strategy,” he said, explaining that while the Government is responsible for resettlement, reintegration, and infrastructure, the UN and the Filipino authorities “will work [together] very closely”.

Turning to a assess the broader implications, the Secretary-General said that at this time, it may be very difficult to attribute one single storm to the climate change phenomenon. Yet, the intensity, severity and magnitude of the destruction and frequency of natural disasters, extreme weather patterns, indicate clearly what international scientists have been saying: that it may be a man-made disaster because climate change has been caused by human beings.

“Then, the solution must be found by human beings. That's why I am here,” said the UN chief, noting that he discussed [this] at length with President Aquino this morning, how the UN and its Member States, including the Philippines, can work together to strengthen the world's capacity to reduce disasters.

While storms like Haiyan might not be prevented, “at least we can reduce and minimize the loss of life, the damage of our properties, valuable properties. That's what I'm going to [sound the] alarm [to] the world again, send out strong messages to the world, and I'll try to … have the world focus, on reconstruction and resettlement of your country and of your community.”

He thanked Tacloban Mayor Alfred Romualdez and Leyte province Governor Dominico Petilla and all leaders, the United Nations Development Programme (UNDP) and ministers in Tacloban for their hard work. He also commended the hard work of all the people now clearing debris.

In addition, Mr. Ban said many international organizations are sending their helping hands to the area, with at least 180 international partners already there, and some 25 nations already proving engineering and military rescue teams. “I really appreciate their very noble generous support. This is what we need to do for humanity,” he added.

The UN chief said that despite the devastation, he was heartened to see that the people of Tacloban are returning to their normal lives, businesses are coming back, “and people are working hard, people are united.” 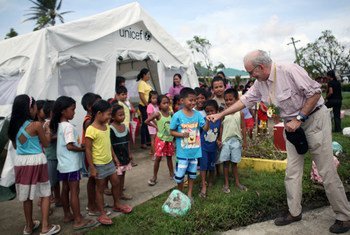 17 December 2013
With the lives of nearly six million children disrupted by the typhoon that devastated the Philippines a month ago, 1.4 million of whom lost their family homes, the United Nations is forging ahead with long-term programmes to restore schooling, protection, vaccination and other child services.