Brazilian authorities need to give further priority to the poorest and most marginalized, to ensure that inequalities in the country are progressively eliminated and all receive access to sanitation and water, an independent United Nations human rights expert today urged.

Wrapping up her first official mission to Brazil, the UN Special Rapporteur on the human right to safe drinking water and sanitation, Catarina de Albuquerque, said that Brazil was a “country of contrasts.”

“I was shocked by the misery I saw and by the lack of access to sanitation and water by significant portions of the population. These are fundamentally people living in favelas or in rural areas,” said Ms. De Albuquerque.

“Even though I acknowledge progress in this regard, the truth is that still millions of Brazilians live in deplorable conditions where access to sanitation and water is still only a distant dream,” she added.

Brazil recently adopted ‘PlanSab’, a National Water and Sanitation Plan with $150 billion allocated from the federal budget to the sector in the coming two decades.

The Special Rapporteur called the document “excellent” and said she was “very positively impressed” by the allocation.

“Despite the positive examples of social participation in some social programmes, and government institutions, I was especially touched by my interaction with many Brazilians, who repeatedly – in the different regions I visited – told me that they still felt invisible and forgotten by public powers.”

In the area of sanitation, the expert explained, “the low coverage does not match the advances of modern Brazil, where 52 per cent of the Brazilian population still doesn’t have sewage collection, and only 38 per cent of the sewage generated is treated.”

“The fact that Brazil still has almost 8 million people defecating daily in the open is unacceptable and an affront to human dignity,” Ms. de Albuquerque stressed. This lack of access to sanitation is particularly serious in the North, where less than 10 per cent of the population has sewage collection.

During her fact-finding mission to Brasília, Rio de Janeiro, São Paulo, Fortaleza and Belém do Pará, the Special Rapporteur also received numerous complaints of people suffering from diarrhoea and other water and sanitation-borne diseases due to the bad quality of water.

She will present a comprehensive report to a forthcoming session of the UN Human Rights Council, which will include her final findings and recommendations to the Government of Brazil. 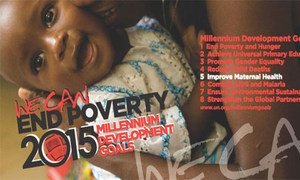 United Nations independent experts today called on countries to ensure the post-2015 development agenda focuses on equality, social protection and accountability, noting that one billion people around the world are still living in poverty.