An independent United Nations human rights expert today called on the Government of Belize to adopt a comprehensive programme to protect and assist victims of trafficking and to ensure that the perpetrators of this scourge are punished.

According to a news release issued by the UN human rights office (OHCHR), Belize is a country of destination, transit and, to a limited degree, of origin, where human trafficking disproportionately affects women who are mainly trafficked for sexual exploitation – particularly women from the neighbouring countries of Guatemala, El Salvador and Honduras.

Wrapping up her official visit to the country, UN Special Rapporteur on trafficking in persons Joy Ngozi Ezeilo said Belize should avoid a “repressive” immigration policy that compounds the problem of human trafficking and undermines efforts at combating and preventing the phenomenon and providing holistic assistance to the victims.

Ms. Ezeilo also cited a growing problem of crimes against children, especially sexual exploitation of young girls from poor families through the ‘sugar daddy’ syndrome and ‘fichería’ in bars, where men pay a higher price to drink with the girls (‘ficheras’), a practice identified as a prelude to prostitution.

The expert welcomed Belize’s ratification of key human rights treaties and its adoption of the Trafficking in Persons Prohibition Act. However, she voiced concerns about the capacity and the willingness to identify trafficked persons and potential victims of trafficking, especially those in mixed migration situation.

“More worrisome is the rampant and indiscriminate criminalization of irregular migrants for irregular entry into Belize which contributes to driving the phenomenon of human trafficking further underground,” she stressed.

She noted that immigration officers routinely prosecute, convict and/or fine immigrants even before giving them an opportunity to tell their stories or be identified as trafficked persons or potential victims of trafficking.

“The practice of criminalization of irregular immigrants is against international human rights standards and practices, especially given the inhumane conditions of detention and the absence of basic assistance including in establishing contacts with families, embassies and lawyers,” the expert pointed out.

Ms. Ezeilo drew special attention to the fact that children under 18 years of age are also punished for breach of immigration laws and kept in prison since there is no separate facility for the detention of irregular migrants. “I met pregnant underage girls who may be potential victims of trafficking and are currently detained along with adults,” she said.

“I am further concerned about the growing reports of child prostitution and sexual exploitation of girls in the tourism industry,” she stated.

Ms. Ezeilo will present her report, including a number of recommendations, to the UN Human Rights Council at its June 2014 session in Geneva.

UN independent experts, or special rapporteurs, are appointed by the Council to examine and report back on a country situation or a specific human rights theme. The positions are honorary and the experts are not UN staff, nor are they paid for their work. 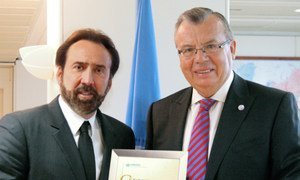